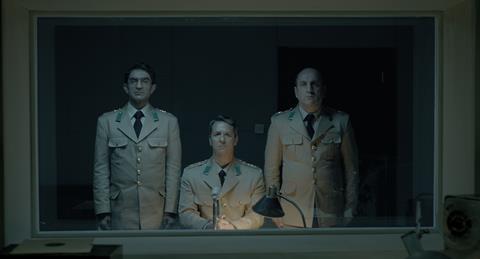 Comedy of the absurd has rarely felt so strangely real as in this dark, droll riff on an attempted Turkish military coup that took place in May 1963. There’s no indication the film is based on a true story that only those with long memories are likely recall, and this element of uncertainty, together with the director’s intimate, stylized take on the period setting, leaves the audience free to draw comparisons with more recent events. For example, the controversial failed coup of July 2016, which strengthened the political hand of Recep Tayyip Erdoğan, currently entering his fifth year as president of the Anatolian republic after serving eleven as prime minister.

It would be wrong, though, to present Mahmut Fazil Coşkun’s third and most exportable film to date as a trenchant comment on Turkey’s current political scene. It’s just as much a parable of this complicated nation’s resilience, the way life flows on regardless as military and civilian juntas come and go. And The Announcement works just fine on its own terms, as a poised political chamber drama that very gradually opens up to comedy without ever quite divesting itself of a sense of brooding menace. It takes its time doing so, for sure: this is one for patient arthouse audiences with a fine-tuned sense of irony.

There are more questions than answers at first as, after an odd medical-examination prologue that will only be explained much later, we see two glum, taciturn, besuited men taking a taxi ride across Istanbul at night. Shot mostly through the taxi’s old-fashioned double-panel windscreen, this sequence has a tense, noir feel leavened by a hardly perceptible touch of very dry humour. Soon enough, after meeting up with accomplices in a bakery and overcoming a small setback, the men, now three, are crammed into a bread delivery truck, dressed as army colonels. Their destination is Istanbul State Radio, where these conspirators plan to read out a prepared statement announcing a military coup. Except that the radio has gone off air for the night and the one technician able to operate the equipment is nowhere to be found.

The risk in any exercise of this kind is launching into comedy too soon, or letting deadpan poise descend into mannerism. Fazil Coşkun avoids both dangers, most of the time, reminding us as small talk is exchanged about frigidaires (a novelty in Turkey at the time), the correct way to serve Martini and the North Korean national anthem, and as the errant technician is finally tracked down as he moonlights at a makeshift film dubbing studio, that people can die in coups, even when they’re as incompetently run as this one.

The director and talented Bulgarian-Colombian DoP Krum Rodriguez work through a series of fixed-camera scenes, often symmetrically framed, which jolt this dour comedy out of its period setting towards a more universal sensibility. The drab browns, beiges, greys and greens of the spot-on production design have the same effect. By the end – thanks also to a perfectly-judged final shot set in a restaurant – The Announcement has led us ably along the thin ridge that separates comedy and tragedy, and shown what a familiar trek this is for many Turks. The tragedy may be fogbound for most of the walk, but it’s only a lost foothold away.