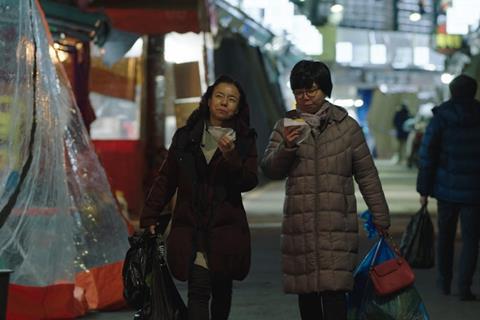 ‘The Apartment With Two Women’

A mother and daughter live in a state of perpetual conflict in The Apartment With Two Women. Writer/director Kim Se-in’s impressive first feature unpicks their relationship in an unflinching family psychodrama marbled with wry humour and distinguished by some fiercely committed performances. A world premiere showcase at Busan should be the start of wide festival exposure, despite the feature’s length.

Kim establishes the claustrophobic nature of the central relationship from the very start. In a cramped bathroom, Sukyung (Lym Ji-ho) is sat on the toilet as her twentysomething daughter Yijung (Yang Mal-bok) washes her smalls in the sink. When the mother finishes her ablutions, she merely peels off her underwear and throws them in with the rest of the washing. Not a word is said.

Indeed, the two women could not be further apart in character or temperament. Sukyung is a brazen, hot-tempered woman who wears blazing bright colours and lives by a philosophy of never apologising for who she is. Yijung dresses in baggy, washed-out sweatshirts and hides behind a tumble of long black hair. She cowers from the world whilst Sukyung boldly strides towards it.

The undeclared war between them is marked by a lifetime of resentment and disappointment. Yijung has good reason to believe her mother has never loved or nurtured her. Sukyung regards her daughter as little more than an ungrateful parasite. There are faint echoes of Toni Erdmann in a film that lances the rage and exasperation that can mark a family relationship, but these two women have even more in common with the sisters in What Ever Happened to Baby Jane?

Matters reach a defining moment when a physical fight full of slaps, punches and hair-pulling is followed by a car accident that is no accident. It is easy to conclude that Sukyung is a selfish harridan, and Lym’s take-no-prisoners performance does nothing to soften her or solicit our sympathy. This is a woman without a sentimental bone in her body; she does what she wants and settles any arguments with her fists. In one scene, she’s seen cry, suggesting that maybe she does have a heart, but the camera pulls back to reveal her chopping eye-watering chillies. Such wordless sequences provide some of the film’s sharpest humour.

Kim allows us to witness more of the women’s personalities through the perspectives of others. Sukyung finds herself a new boyfriend in Yong-yeol (Yang Heung-Ju), but the possibility of marriage comes with the encumbrance of his sullen schoolgirl daughter. Yijung finds a potential friend in a work colleague, So-hee (Jeong Bo-Ram), but her neediness starts to sour that possibility. Perhaps the two women are more alike than they might care to admit.

The Apartment With Two Women constantly reveals the flaws and failings of the women. Close-ups scrutinise their faces in moments of hurt and hope, angry flare-ups and wounded vulnerability. Kim has the confidence to let events take their time, even staging one sequence in the pitch black as a power cut plunges the apartment into darkness. The filmmaker sustains a glimmer of hope that things could change for the better. A more conventional film would open the floodgates to a happy ending of reconciliation. The Apartment With Two Women is more guarded, more realistic in assessing where the two women have reached and what might lie ahead.