'The Best Of Enemies': Review 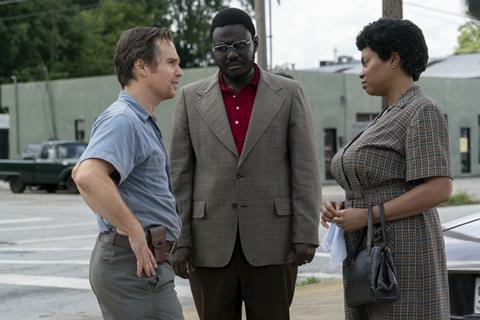 ‘The Best Of Enemies’

Racism is tackled in the most Hollywood ways imaginable in The Best Of Enemies, a painfully earnest and predictable true-life drama that emotes with conviction but never any inspiration. Telling the story of a black activist woman and a white racist man who, reluctantly, learn to find common ground, actors Taraji P. Henson and Sam Rockwell maintain their dignity, but writer-director Robin Bissell’s formulaic examination of bigotry, class and family succumbs to cliché early and often. No doubt the world needs more paeans to tolerance, but movies as ineffectual as The Best Of Enemies feel profoundly inadequate to the task.

We’re trapped in a slack, simplistic depiction of evil overcome and bigotry neutralised

Slated for US release on April 5, this STXfilms offering will hope to ride a wave of recent racial dramas that have been commercially successful, including Green Book ($304 million worldwide currently) and The Upside ($120 million). Henson and Rockwell have marquee appeal, and The Best Of Enemies could attract adult crowds uninterested in Dumbo or Shazam!, but lack of buzz may hurt theatrical prospects.

Set in 1971 in Durham, North Carolina, the film stars Henson as Ann Atwater, a single mom fighting to improve the lives of African-Americans in her community. Opposed to racial equality is C.P. Ellis (Rockwell), the president of the local chapter of the Ku Klux Klan, who views blacks as inferior. But after a black school suffers serious fire damage, the city must decide where the students will go: either back to their devastated classrooms or integrated with the white students in their school. A committee is formed to vote on the measure, and Atwater and Ellis are selected as co-chairs — even though they despise each other.

This little-known real-life story is reduced to cardboard drama by first-time feature filmmaker Bissell, a producer or executive producer on movies such as Seabiscuit and The Hunger Games. Throughout, The Best Of Enemies aches with sincerity as we witness these two strong-willed individuals eventually come to respect one another, but the process proves telegraphed and emotionally manipulative. Anyone familiar with inspirational movies about racial disharmony in the American South — where diametrically opposed individuals magically put their differences behind them — will instantly recognise The Best Of Enemies’ narrative contours. Unfortunately, the film never surprises or offers new insights on such well-trod terrain, slavishly following the genre tenets with utter timidity.

Henson plays her character, who’s nicknamed Roughhouse Annie for her battering-ram demeanour, in only one gear. Although it’s amusing to see the Oscar-nominated actress spit venom at the racists around her, Atwater’s lack of gradation gets tiresome.

Likewise, Rockwell seems to be drawing from his Oscar-winning work in Three Billboards Outside Ebbing, Missouri, once again playing a narrow-minded hick who grows a conscience, although the writing here isn’t nearly as sharp or provocative. As a result, Ellis’ change of heart fails to convince, even if Rockwell tries to locate the humanity within this monster.

On a more macro level, however, The Best Of Enemies is exhausting because of its tired storytelling devices — especially its supposition that all a racist white man needs to become a better human being is to spend some time with a black person. Even if the true story played out exactly as Bissell’s film suggests, there’s a stultifying, patronising attitude emanating from the material, which barely grapples with the terrible power of intolerance. Instead, we’re trapped in a slack, simplistic depiction of evil overcome and bigotry neutralised. One suspects that, for the real Atwater and Ellis, nothing resolved itself as tidily as what occurs in this film.

Marcelo Zarvos’ bland score merely emphasises this lacklustre execution, complemented by some on-the-nose period song choices that are occasionally groan-inducing in their obviousness. (After its stunning use in Zodiac, Donovan’s “Hurdy Gurdy Man” should probably be retired for a while.) The supporting cast does honourable work in one-dimensional roles, but give credit to John Gallagher, Jr., who has a few affecting moments as one of the few whites sympathetic to Atwater’s cause. It’s that rare instance in which The Best Of Enemies doesn’t feel completely embalmed in its own drab worthiness.

Screenplay: Robin Bissell, inspired by true events chronicled in The Best Of Enemies: Race And Redemption In The New South by Osha Gray Davidson