Valeria Sarmiento presents an accompaniment to both her own work and that of her late partner, Raul Ruiz 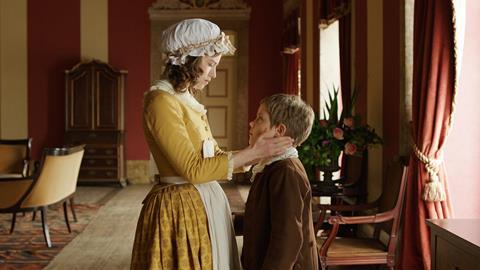 Viewed in the right light, The Black Book is an exercise so defiantly old-school as to be hyper-modern, so augustly conservative as to be all-out avant-garde. For many sceptical viewers, however, this highbrow costume melodrama will come across as airless and academic.

There’s no denying the individuality of this defiantly eccentric piece by Chilean director Valeria Sarmiento, however. As well as having a long directing career in her own right (Amelia Lópes O’Neill, Our Marriage), Sarmiento was the partner and long-term editor of the late Raúl Ruiz, and The Black Book is at once in the spirit of Sarmiento’s own historical epic Lines of Wellington (2012) and of Ruiz’s Mysteries of Lisbon (2010), both of which had dual lives as theatrical releases and TV mini-series. The Black Book - implicitly a sort of prequel to Mysteries, although the connection is never overt – doesn’t have the luxuriant sprawl of either, but its compactness and prestigious polish may make it a festival attraction for audiences with a historical or literary bent. Outside-world appeal will be more elusive.

Like Mysteries, Sarmiento’s film is based on a novel by 19th-century Portuguese writer Camilo Castelo Branco. Starting in the 1780s, The Black Book has as its heroine and voice-over narrator Laura (Lou de Laâge), a young woman of unknown parentage living in the Rome residence of a French count; her job is to tend a boy named Sebastian, the count’s ward, whose father is similarly unknown. Poisoned by a sinister cardinal, the dying count entrusts the boy to his friend Leopold, Marquis de Lusault (Niels Schneider), who takes Sebastian to Paris with Laura in tow. Leopold promptly seduces Laura, whose heart is broken when he marries the aristocratic Suzanne de Montfort (Jenna Thiam).

The plot is slow to thicken, but once it does, it takes on the constituency of a well-simmered minestrone. Enter the mysterious Cardinal Rufo (Stanislas Merhar), whose laconic black servant Antonio (David Carocol, largely required to skulk rather than speak) describes him as “a saint… or a devil.” Rufo knows the truth about Laura’s background: suffice to say she is not really, as she had thought, the daughter of a poor Roman washerwoman. Before long, the French Revolution has broken out, but less violently than some of the faints and fevers that Laura repeatedly falls into, in time-honoured melodrama fashion, whenever she receives a shock.

Rich in abrupt reversals of fortune and startling revelations – delivered sometimes in epistolary form, sometimes in flashback – The Black Book comes across very much as a pendant to Mysteries of Lisbon, although without either the luxuriant expansiveness of its stories-within-stories structure or its visual eccentricity. The Black Book stresses stateliness, both of imagery and of tempo, with certain scenes – notably an address given by future political assassin Charlotte Corday – composed like 19th-century historical paintings. Visually, the film is a treat, with DoP Acácio de Almeida making sly use of mirrors, and laying on the candlelight to ravishing effect, especially in an elegantly erotic tryst between Laura and Leopold.

What The Black Book has in common with both Mysteries and war story Lines of Wellington is a somewhat experimental approach to examining the conventions of 19th-century Romantic narrative in a modern cinematic context; in particular, the detached, decorous acting makes a knowing contrast with the extremity of the emotions evoked, so that romantic passion, jealous anxiety, murderous obsession et al are presented with a kind of matter-of-fact sang froid. While de Laâge is a strong presence, her crisp visual presentation also contributes to making Laura too distant and contained a heroine to allow much emotional connection for the viewer. But then, all the characters are manifestly puppets in the hands of Sarmiento and returning Mysteries/Wellington screenwriter Carlos Saboga.

Screenplay: Carlos Saboga, based on the novel by Camilo Castelo Branco