'The Bloom Of Yesterday': Tokyo Review 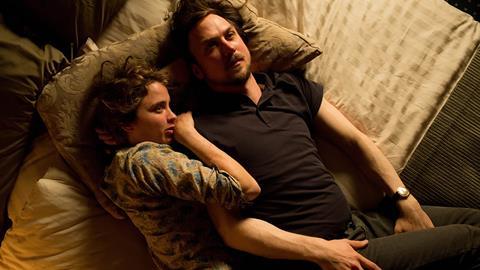 “A Holocaust researcher with a sense of humour is like a butt without a hole” isn’t a turn of phrase heard often. Uttered in Chris Kraus’ Tokyo Grand Prix winner The Bloom of Yesterday, it serves several purposes: establishing the vastly dissimilar personalities of its always-arguing leads, serious-minded veteran researcher Totila Blumen (Lars Eidinger) and his erratic new intern Zazie (Adèle Haenel); inspiring an easy laugh in a comedy-tinged romance constantly flirting with absurdity; and challenging accepted ways of tackling one of the most solemn chapters of human history.

The film proves steeped in contrivance, cliché and thin characterisations

Also taking out Tokyo’s Wowow viewer’s choice award, The Bloom of Yesterday may continue the rounds of the festival circuit, with a theatrical release slated for Germany and Austria in January 2017. Receiving the same acclaim as Japan is far from certain, however. For every ambitious attempt to bring lightheartedness to its topic, and to people with family histories on conflicting sides of the war trying to find common ground, the film also proves steeped in contrivance, cliché and thin characterisations.

When Totila and Zazie first meet, irritation prevails for both the misanthropic German historian and the eager French student. He struggles with her gratingly frank, outspoken and erratic demeanour, while she refuses to ride in the same kind of vehicle she believes her grandmother was gassed in. And, as he installs her in a neighbouring apartment to the previous residence of their recently deceased mentor, learns of her affair with his boss (Jan Josef Liefers), and is forced to take her on official outings, his annoyance only grows.

Their task: to help arrange a conference on Auschwitz that their beloved professor had spent his life pursuing, but has now become threatened by the over-involvement of corporate sponsors and the lack of commitment by key speakers. It’s a subject with personal ties for both, especially given that Totila came to fame writing a book about his prominent Nazi war criminal grandfather.

So, they travel, argue, Zazie throws Totila’s wife’s (Hannah Herzsprung) dog out the window of a moving vehicle. Indeed, domestic disharmony further blights the film’s moping male protagonist, which his excitable new colleague slowly offers a respite from, albeit for her own reasons. In the process, writer/director Kraus wades further and further into conventional rom-com territory, even if his premise seems to indicate otherwise.

The feature’s idea of opposites attracting might be burdened with the shadow of inherited pain from real-life horrors, and Zazie’s manic pixie dream girl-like tendencies might be grounded in her existential struggles, but The Bloom of Yesterday still conforms to a seen-before formula.

As is all-too-commonly the case in features about middle-aged, crises-raged men finding solace in an eccentric younger woman, the storyline serves Eidinger better than Haenel, though neither ever appear as though they’re playing real people. With the more contemplative aspects of Kraus’ script coming through via dialogue rather than performance, the leads switch between the specific modes required at any given time rather than demonstrating genuine transition. That said, both fare best in later, more intimate and revealing moments.

On a technical level, The Bloom of Yesterday finds the right palette (bright but never vibrant) and pace (energetic but not rushed) to suit its levity-filled but ruminative mood; if the film’s content typically feels clumsy in its attempt to ensure audiences are entrenched in thoughtful, feel-good territory, its production never suffers the same fate. In particular, cinematographer Sonja Rom lenses Germany and Austria with an eye for texture that’s not otherwise apparent in the narrative.