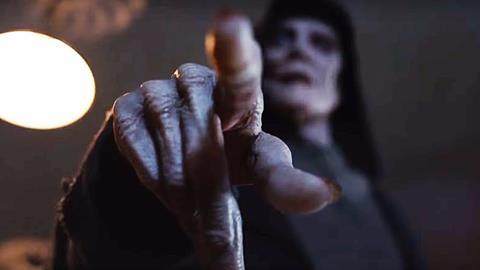 In The Bye Bye Man, there is nothing to fear except fear itself — literally. Unfortunately, this pro forma horror movie doesn’t do much to capitalize on its vaguely clever premise. Chronicling the self-destruction of three tight-knit college friends, director Stacy Title presents us with an unseen, evil spirit that can only wreak havoc on those who obsess over it. But any hopes of smart social commentary or unsettling psychological underpinnings are quickly shattered by a clichéd screenplay and amateurish performances.

The Bye Bye Man is little more than a series of scenes of people walking into dark basements or peeking into doorways,

Opening January 13 in the US and the UK, this STX Entertainment project boasts scant star power — Carrie-Anne Moss and Faye Dunaway have brief cameos while lead actress Cressida Bonas has some tabloid recognition as the former girlfriend of Prince Harry — and even less buzz. The Bye Bye Man could gain some traction before another horror offering, Split, arrives next week, but dismissive reviews may dampen further interest.

At a Wisconsin university, childhood buddies Elliot (Douglas Smith) and John (Lucien Laviscount) have just bought a house off-campus where they’ll live with Elliot’s beautiful girlfriend Sasha (Cressida Bonas). All three are very close, but once they uncover some disturbing writing inside the house referring to a mysterious “Bye Bye Man,” they begin to realise that simply by saying this person’s name, they’ve summoned him inside their minds. Soon, the characters begin experiencing increasingly paranoid hallucinations that convince them that they are about to die.

Based on a short story by Robert Damon Schneck, Jonathan Penner’s screenplay tries to derive suspense from Elliot’s nagging insecurity that Sasha has feelings for John, who is very flirtatious with her. Title (who directed the 1995 dark comedy The Last Supper) can’t bring much tension to this romantic triangle, however, because none of the three characters is memorably drawn. Plus, the actors fail to create an impression: Smith’s earnest Elliot, Laviscount’s mildly cocky John and Bonas’ bland damsel-in-distress Sasha are so forgettable that there’s no great drama or pathos in their slow descent into madness.

To be fair, The Bye Bye Man has a kernel of an interesting insight — that the bogeymen we assume are out in the world aren’t nearly as terrifying as the imagined horrors we can create in our heads. The film’s titular menace is rarely seen, but he doesn’t need to be: instead, he lets the characters annihilate themselves by tapping into their darkest fears and twisted desires. But knowing that they can only keep The Bye Bye Man at bay by not thinking about him or saying his name proves futile, as the trio discover that the more they try to resist letting him into their thoughts, the easier he enters their consciousness.

For these narrative ideas to really take hold, though, Title would need to create a gripping psychological thriller — putting the horror in our minds just as The Bye Bye Man is doing to his prey. Alas, perfunctory jump scares and occasionally spooky music from the composing duo The Newton Brothers aren’t enough to enliven the film’s thematic undercurrents.

Working with what appears to be a low budget, Title can scare up a little atmosphere, especially when the hooded Bye Bye Man (played by Doug Jones) lurks in the corner of the room, unbeknownst to our freaked-out heroes. But after the supremely creepy haunted-house vibe of The Conjuring, The Bye Bye Man is little more than a series of scenes of people walking into dark basements or peeking into doorways, the sense of dread always too faint to really unnerve.

As brief glimmers of life, Moss and Dunaway are a relief from the otherwise dull cast. Moss plays a detective who starts to take these kids’ claims of being haunted by an invisible force seriously, while Dunaway flirts with camp as a spooky widow who may hold the key to The Bye Bye Man’s origins. These two veterans possess real confidence and presence, and they make the film’s doomed romantic triangle feel even more childish and irrelevant by comparison.

Screenplay: Jonathan Penner, based on “The Bridge To Body Island” by Robert Damon Schneck