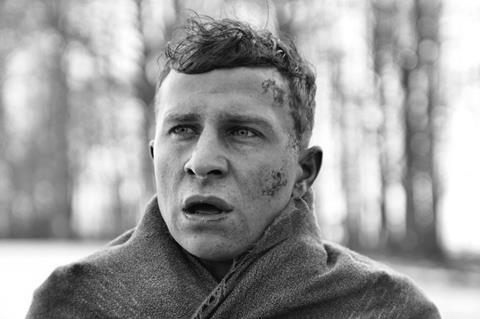 For his first German-language feature since 2003, director Robert Schwentke (RED, Insurgent, Allegiant) uses the device of a uniform to explore what’s underneath, and finds darkness in the hearts of men. The Captain takes the real-life story of a 21 year-old conscripted private at the very end of World War II who, having deserted his unit, stole a captain’s uniform and adopted the role of very persecutors from whom he was fleeing. It looks at the implosion of violence from soldiers honed and hardened by war once the order of combat starts to break down. It’s a powerful, profoundly uncomfortable watch.

This is a film which doesn’t pull its punches, both thematically and stylistically.

Shot in crisp, cruel black and white, and punctuated with grotesque Hieronymus Bosch-style scenes of depravity, The Captain is a German WWII story which arguably has contemporary and universal resonance. Whether this will translate to audience interest is another matter. Although this is by no means a picture which will be limited just to the festival circuit, its theatrical prospects may be restricted by the marketing challenges posed by the unflinchingly tough subject matter.

It’s two weeks before the end of the war, and the Third Reich is unravelling. Deserters are pillaging and stealing in order to survive. One of them, Willi Herold (Max Hubacher), his face scabbed with crusted mud, narrowly escapes being shot by German officers in a jeep, then witnesses a fellow stray get pitchforked to death over the theft of some eggs. When he stumbles upon an officer’s uniform in an abandoned truck, he puts it on. And immediately his bearing changes. The cowed, kicked dog demeanour vanishes, in its place a clipped, casual cruelty.

The uniform brings him status and power, both of which he discovers a taste for. But if clothes maketh the man, in this case they make him a monster. Emboldened by the opportunistic soldiers who attach themselves to him, he embarks on a precarious game of brinksmanship, brutally raising the stakes every time it looks like he might be discovered.  Of his rag tag band of men, two suspect that The Captain is, like them, a deserter trying to bluster his way out of a tight spot. One, Freytag (Milan Peschel) is the conscience that Herold tries to ignore. Furrowed and sorrowful, he bears witness to the atrocities. Kipinski (Frederick Lau) meanwhile manifests every savage impulse, he’s a rampaging Id armed with an assault rifle.

This is a film which doesn’t pull its punches, both thematically and stylistically. Repeated used of overhead shots gives a God’s eye view of the tusseling scrum of humanity below; a cringing low camera emphasises the sordid ugliness of the terrified men who jump to appease the Captain’s demands.

Even more striking is the score – more like an industrial accident than music, but it’s chillingly effective. One decision jars however: the insertion, perhaps fifteen minutes before the end of the film, of a caption and a contemporary colour shot of the site of the camp where Herold perpetrated his worst crimes. It’s distracting and it unbalances the scenes which follow, dissipating the power just when the film should be building to its conclusion.