'The Chronicles of Melanie': Tallinn Review 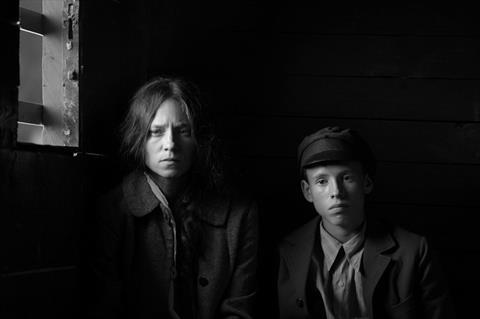 On the morning of June 15th, 1941, over 40,000 people from Latvia, Estonia and Lithuania found themselves torn from their family homes and forcibly relocated. This mass deportation, executed on the orders of Stalin, saw husbands and wives separated and made to toil in Siberia for starvation rations. This powerful but gruelling film tells the story of one woman, Melanija Vanaga, who, at the age of 86, published her account of the 16 years she was forced to spend in Siberia.

The distorted sound creates a sense of delirium; the painfully slow movements of the malnourished women gives the film a nightmarish quality

Strikingly shot in black and white, and featuring an arresting blend of sound design and music, this is a potent account of the human cost of Soviet ethnic cleansing in the Baltic region. Although less experimental in approach, the film has a thematic kinship with the Estonian picture In The Crosswind; both deal with the horrific experiences of a wife who writes letters to a husband whose location she doesn’t know for sure.

Chronicles, which plays in the main competition at Tallinn’s Black Nights Film Festival, is an eye-catching piece of work which should attract attention on the festival circuit. Interest within the Baltic region is likely to be keen. But pacing issues and the unrelenting bleakness of the story may pose a marketing challenge to any distributor looking to release the film theatrically in territories less invested in the historical events explored.

We get the briefest of glimpses of the comfortable life that Melanie (a physically committed turn from Sabine Timoteo) and her husband, a former newspaper editor, share in Riga. But almost immediately they are wrenched from the security of their tasteful, book-lined apartment and plunged into a cattle truck. Melanie and her son Andrejs (Edvins Mekss) travel with the other women, confined for three weeks with little more than stale bread to chew on. There’s a shocking moment in which, in a gesture of defiance and desperation, one of the women kills her three children and then takes her own life.

Finally released from the truck, the dazed women stumble into a field and collapse. An ominous dull rumble builds on the soundtrack. Soviet soldiers bark orders, forcing the Latvian women to sign documents written in Russian; a language that few of them can read. The document, it turns out, states that the women have agreed to 20 years of voluntary relocation to Siberia.

Director Viestur Kairish extinguishes every chink of levity or optimism. A truck full of revellers celebrating the end of the war is plunged into an icy lake, literally pouring cold water on the brief sliver of hope that the women can finally return home.

The starvation, hardship and disease reduces the women to an almost trance-like subsistence state. The distorted sound creates a sense of delirium; the painfully slow movements of the malnourished women gives the film a nightmarish quality. Time slows down, both for the exiled Latvian women and also, at times, for the audience. It all amounts to a challenging viewing experience.