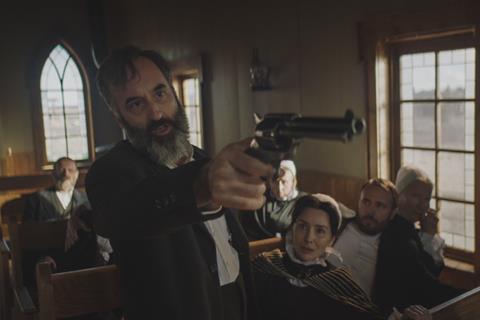 It may be set in the past, but The Curse Of Audrey Earnshaw couldn’t feel more timely. A community ravaged by pestilence, fearful of the unknown and prejudiced towards outsiders sounds all too familiar in the age of a global pandemic. Thomas Robert Lee’s handsomely mounted, intriguing folk horror yarn may not reveal all its mysteries but it provides classy genre fare. It will find a warm welcome at genre festivals and beyond following a world premiere at Montreal’s Fantastia International Film Festival.

The emphasis is on the unsettling atmosphere and how the heady brew of guilt and anger, suspicion and retribution slowly comes to the boil

Originally entitled The Ballad Of Audrey Earnshaw, the film begins with a lengthy scrawl of backstory. In 1873, families broke from the Church of Ireland to establish their own devout community in an isolated settlement in North America. In 1956, an “ eclipse” left the soil and livestock poisoned. Agatha Earnshaw (Catherine Walker) was the only one whose land still prospered. At the time, she give birth to a daughter. It is now 1973 and Audrey Earnshaw (Jessica Reynolds) is 17.

Having disgorged this information, director Thomas Robert Lee settles down to convey a sense of a God-fearing community untouched by time or technological advances. Transport is by horse and cart. Oil lamps light the gloom of wood cabins. Logs are piled high, ready to throw on a warming fire. Only the rare sight of a plane crossing the sky reminds us that this is late in the 20th century.

Cinematographer Nick Thomas gives the film the look of a gothic western. Gloomy skies slump over misty mountain roads and snowy forests. Colour has drained away from the land. It almost feels like something from the world of D.W. Griffith and Lillian Gish.

Agatha has kept any knowledge of her daughter secret. The girl is never left alone. When Agatha travels, Audrey accompanies her in a wooden crate and is kept from prying eyes. A raven-haired beauty, her cherry-red lips are a vivid burst of colour in this muted world.

The story unfolds in four chapter headings - Incantation, Descent, Fallout and Spring. Initially, we are uncertain whether Audrey is being protected from the community or whether the community is being kept safe from her. Agatha appears to belong to a coven of witches. Her life has involved a good deal of sacrifice and secrecy. Audrey is angered by the way the community treats her mother and her desire for revenge sparks a wave of reckoning.

Quite why everyone, including Agatha, has stayed put over all these soul-destroying years is one of the mysteries that the film never explains. Instead, the emphasis is on the unsettling atmosphere and how the heady brew of guilt and anger, suspicion and retribution slowly comes to the boil.

Jessica Reynolds is a striking horror presence in the tradition of Barbara Steele. If the film doesn’t make enough demands on her, the ending suggests we may not have seen the last of Audrey Earnshaw.