'The Devil And The Deep Blue Sea': Tribeca Review 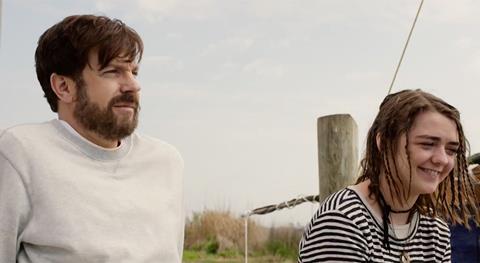 In The Devil And The Deep Blue Sea, a man who has gone adrift finds his emotional compass thanks to a runaway teenager played by Game of Thrones’ Maisie Williams.  Yet this well-meaning debut feature about following your dreams just treads water. As a bereaved architect in New Orleans, Jason Sudeikis is sure to bring some of his fans along for this stab at the tragicomic, but neither this cast nor this story are enough for The Devil to make too many waves.

Bill Purple’s first feature as a director and co-writer opens as artist Penny (Jessica Biel) is goading her Every-Nerd architect husband, Henry (Sudeikis), to “be bold.”  When Penny’s carefree driving gets her killed on the road, Henry goes into a tailspin (hence the title), until he befriends an angry orphan teen, Millie (Williams), who gathers wood on the street and propels him on to crazier things, such as building an ocean-going raft.

Millie’s mission is to turn scrap into a vessel like Kon-Tiki, or the one on which her late father was lost at sea. Escaping from his own grief, Henry chops down trees in his garden and dismantles parts of his house to get her there.

Purple and co-writer Robbie Pickering tie their story together with voice-overs by Williams, full of home-spun wisdom echoing young Quvenzhané Wallis’s narration in Beasts of the Southern Wild (2012), another Louisiana tale of obstinacy and true grit.

Defying the obvious expectations, The Devil And The Deep Blue Sea is about two misfits stumbling toward an ideal, rather than hooking up. Don’t expect cross-generational sex, or anything close to it, in this story of pluck and perseverance.  Purple and his producers seem to be aiming at a family audience, although that goal doesn’t keep the word “shit” from being uttered in almost every sentence.

What Purple does give you is dull Henry’s transformation into a free spirit, complete with a beard (that makes Sudeikis look younger) and a scandalised boilerplate mother-in-law played by Mary Steenburgen. Sudeikis plays the absent-minded architect to type (in the footsteps of Jimmy Stewart or Tom Hanks) and Williams, with furious eyes, spits out curses at everything but her lovable white junkyard dog.

In the film’s early scenes, Biel is an annoying but endearing woman in late pregnancy, radiant in close-ups that haunt the story after she dies.  Once she’s gone, two hangers-on at Henry’s house – Dumbass (Orlando Jones) and Cajun-speaking Pascal (Richard Robichaux) – are left to comment on life after Penny.  Their scenes and their lines, delivered with restrained panache, save The Devil from its own preachiness on freedom and boldness. Deft and understated, they leave you wishing for more.

New Orleans comes across as oddly charmless here; Purple doesn’t film any familiar monuments (nor does he make much reference to Hurricane Katrina of 2005), although the everyday indolence of the city does emerge refreshingly when straight-laced Sudeikis abandons the workaday world. That effect would have worked better if the cast (especially young UK actor Williams) had a more convincing mastery of ‘Nawlins’ speech.

That vocal challenge would be a hurdle for any young actor parachuting into a unique culture that defined by its sounds. Williams’s performance won’t slow the rise of her film career, but it gives a generic coming-of-age tone to a role that could have had more local magic.

Also unconvincing is the score by Justin Timberlake, credited as the film’s composer, over-bubbling to evoke mysteries being revealed at plot pivots and hymn-like with extended chords at emotional moments. A city with so much music at its core could have expected better.