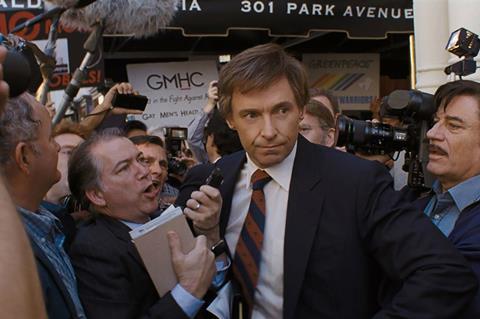 The dramatic fall of 1987 US Presidential hopeful Gary Hart proved that the private indiscretions of public figures could destroy political careers - at least back then. The Front Runner captures the moral dilemmas and changing attitudes inspired by the Hart story with sprawling, Altmanesque brio. The combination of breezily entertaining political turmoil and personal tragedy may lack a sharp focus but it still has enough juice to attract audiences who also sought out The Ides Of March (2011) or The Post (2017).

In 1987, Colorado Senator Hart (Hugh Jackman) seemed the ideal figure to carry the hopes of a Democratic Party deeply demoralised after Ronald Reagan’s two term Presidency. A handsome charmer with lofty principles and crowd-pleasing eloquence, he was significantly ahead in the polls for the party’s Presidential nomination.

Based on Matt Bai’s book ’All The Truth Is Out: The Week Politics Went Tabloid’, The Front Runner focuses on three key weeks in the Hart campaign. Director Jason Reitman uses overlapping conversations, multilayered sound and a fast, snappy pace to capture all the backroom hustle and bustle of a political campaign. Hart’s young, devoted team work tirelessly to promote his candidacy, the respectful press pack look for a fresh angle, trading banter and stories as if they had strayed from a production of The Front Page.

It becomes clear that Hart has no stomach for the showbusiness side of running for office. He is a serious politician, not a performer and refuses to make his private life into public property. When the Miami Herald break a story that exposes his infidelity, it is the start of a feeding frenzy that becomes a defining moment in the shifting relationship between the media and the powerful.

The initial bouncy, boisterous cut-and-thrust tone of The Front Runner is very engaging. When the events turn more serious, the film itself moves into a more measured, thoughtful groove. Hugh Jackman’s Hart is a righteous figure and the actor does nothing to soften the fact that Hart was arrogant enough to consider himself invincible and naive enough to believe that his private life was nobody’s business.

Hart is a victim of his own womanising but also of changing times. He fumes against a media reduced to gutter press tactics of doorstepping his wife Lee (Vera Farmiga) or hiding in bushes to capture intimate photos. His tragedy is in not realising that there can be no privacy for a man aspiring to the highest office in the land.

Jackman is a solid presence at the centre of The Front Runner but the ensemble nature of the storytelling means that he doesn’t dominate to the detriment of other figures. Reitman draws out the personal impact on several individuals, providing speeches and standout moments that define the characters and their dilemmas. Notable performances include a poignant Sara Paxton as the object of Hart’s affections Donna Rice, Farmiga as his steely, long-suffering wife and a terrific Mamoudou Athie as a young Washington Post journalist taught bitter lessons about journalistic responsibility.

The Front Runner trades lightly in hindsight humour (“ Do you think anyone will vote for Bush?) and reflections on the implications of Hart’s fate to the modern era. Hart does suggest that the intense media scrutiny on politicians may stop the brightest and the best from even entering the arena. He also remarks that America may simply winding up getting the Presidents it deserves.

The Front Runner may cover a lot of ground and raise more questions about morality and the media than it can ever answer, but it remains a punchy, absorbing political drama.

Screenplay: Matt Bai, Jay Carson, Jason Reitman based on All The Truth Is Out by Bai