Retro slasher movie from Australia should make some commercial splatter 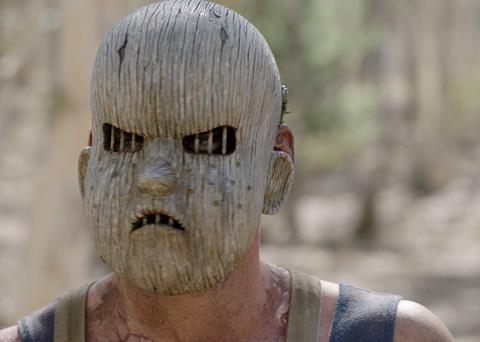 A robustly violent throwback to the gory glory days of 80s slasher movies, The Furies is a punchy genre piece which pits abducted female victims against monstrous masked killers. This is beauty vs beast contest plays out in the outback, for the amusement of shadowy individuals who view the chase and kill through retinal cameras implanted in the eyes of each contestant. The tech aspect doesn’t bear too much in depth scrutiny, but there’s no denying the grisly appeal of this briskly paced carve ’em up.

Following on from screenings at the Brussels International Fantastic Festival and Edinburgh, The Furies should find a warm reception from programmers at further genre specialist events and midnight movie slots. And the juicy combination of gung ho face slicing gore, a whole host of Jason Vorhees-style lumbering maniacs and teen girls in peril should make this a marketable prospect theatrically.

Schoolfriends Kayla (Airlie Dodds) and Maddie (Ebony Vagulans) have an argument so pointless and preposterous, it almost undermines the credibility of the entire film. And given that this is a story in which women are fitted with robotic eyeballs and then chased around a eucalyptus glade by creatures wielding scythes, that’s saying something. Fortunately, the creaky dialogue is soon interrupted by mysterious men who snatch both girls from the street.

Kayla wakes, bleeding from her eye, in a black box and dumped in the wilderness. Written on the box are the words “Beauty 6”. Her first thought is to find Maddie, but instead she stumbles upon two other women. The stress of the situation triggers the first of many epileptic fits – along with her phone and wallet, whoever abducted her also confiscated her medicine.

Inconveniently, the fit coincides with Kayla’s first encounter with one of the ‘beasts’, a massive figure equipped with an axe, with his face covered by what appears to be rotting flesh. Axe-boy makes short work of the only woman who waits with Kayla, in the first of several instances of creatively horrible special effects. Kayla soon learns that, in a Battle Royale-style plot device, the unwilling participants in this game to the death are kept within a certain area by an electronic implants in their brains, and that sometimes the heads of the beasts explode for reasons that she is yet to fathom.

Alliances are formed between the ‘beauties’, but in a fight for survival, can you ever really trust anyone? One girl likens the situation to ‘pigging’ – the hunting of wild pigs – in which the slow pig is always the easiest target. “I’m the slow pig?” muses Kayla, before taking matters, and multiple weapons, into her own hands.

The first feature from Tony D’Aquino is a simple but efficiently nasty little movie. The striking backdrop – trees with white trunks like bleached bones; corrugated iron shacks of a former gold prospecting town – delivers plenty of atmosphere but doesn’t distract from the real meat of the picture, the eye-gouging, skull-cleavering action. And all this is heightened by the kind of score which uses the orchestra like a murder weapon.