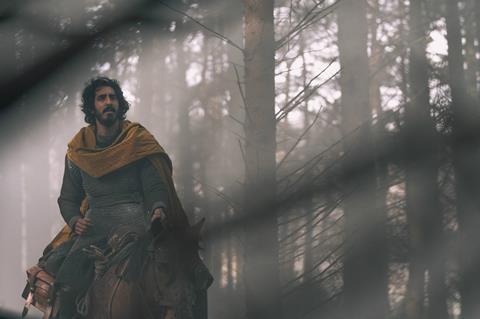 Source: Eric Zachanowich, courtesy of A24

At the start of The Green Knight, Dev Patel’s young libertine admits he has experienced no great adventures — a circumstance that will change by the end of this mesmerising Arthurian drama, which sends his character on a quest that widens his worldview while exposing his fundamental personal flaws. Writer-director David Lowery’s adaptation of Sir Gawain And The Green Knight immerses itself in period details while taking a refreshingly straightforward approach to the fantasy elements — a bold strategy that, if anything, only makes them more mystical. But underneath this story of giants, ghosts, friendly foxes and dastardly bandits is a resonant (and pessimistic) glimpse at a brutal society in which honour is hard to come by.

The whole ensemble complements the film’s air of blunt desperation

Opening on July 30 in the US — the UK release is now uncertain — The Green Knight could be an attractive proposition for arthouse fans, especially those on Lowery’s head-trip wavelength. Patel is joined by Alicia Vikander and Joel Edgerton, but this challenging project may ultimately turn out to be more a cult item than a specialty success.

In the time of Camelot, King Arthur’s (Sean Harris) teenage nephew Gawain (Patel) is enjoying the good life — and the company of his lover Essel (Vikander) — when he is confronted by a mysterious figure known only as the Green Knight (Ralph Ineson), who dares the young man to chop off his head. After Gawain obliges, he is startled to discover that the Green Knight’s head continues to talk, returning to his body and informing Gawain that, in one year’s time, the teenager must submit to the Green Knight’s rightful turn at beheading him.

The bulk of The Green Knight consists of Gawain’s treacherous journey to the Green Knight’s lair, and despite its episodic nature, the film manages to grow increasingly more absorbing as he gets closer to his destiny. Much of that credit goes to Lowery’s creative team, with cinematographer Andrew Droz Palermo and production designer Jade Healy envisioning an Arthurian age full of dank castles, ancient forests and gloomy skies that portend doom just over the horizon. (The Green Knight was shot in the forests of Wicklow in Ireland.) Plus, Daniel Hart’s score evokes dread and wonder in equal measure, adding to the sense that the picture is set in a mythical land removed from our reality.

But the exceptional level of craftsmanship — which includes some seamless, low-key special effects — wouldn’t be nearly as affecting without the comparable care Lowery brings to this story. The Green Knight might seem to be a template coming-of-age tale in which a callow young man finds himself while going on an epic quest, but the filmmaker (who also edited the picture) conjures up arresting vignettes that consistently tinker with that narrative formula, actively questioning the assumption that epic quests reveal what is most noble in the questers.

Patel is such a sympathetic onscreen presence that it’s a wicked bit of casting to have him play Gawain, a character seemingly tailor-made for a hero’s journey — except, as we’ll see, he fails as often as he succeeds, usually because of his naivety or cowardice. Just as Lowery opts for an otherworldly but grimly subdued tone, so too does The Green Knight strip away traditional notions of chivalry and honour as Gawain learns how cut-throat the kingdom outside of Arthur’s protective castle walls can be.

The whole ensemble complements the film’s air of blunt desperation — particularly Edgerton as a lord who offers Gawain shelter, but at a price. His beloved lady is played by Vikander, who in her dual role underlines what’s so eerie and unknowable about this Arthurian age. The fact that Lowery never explains the two characters’ physical resemblance is but one of several mysteries left teasingly unresolved, including why animals sometimes start speaking or towering individuals occasionally traverse the countryside.

Certainly, a project like this risks coming across as ridiculous by sincerely evoking a bygone era of fiction that chronicled valiant knights and spooky witchcraft. So it’s especially impressive that Lowery’s thoughtful, fully invested treatment avoids such pitfalls. By grounding the most fantastical moments in realism, the story’s mud-soaked despair communicates even more strongly. And when Gawain eventually confronts the Green Knight, the film continues to unfold in unexpected fashion, leading to a sequence that, in retrospect, The Green Knight has been building to from the start. Gawain has long lived with the knowledge that a heavy blow was coming his way — Lowery’s finale suggests that we may not realise how we all have a sword hanging over us.