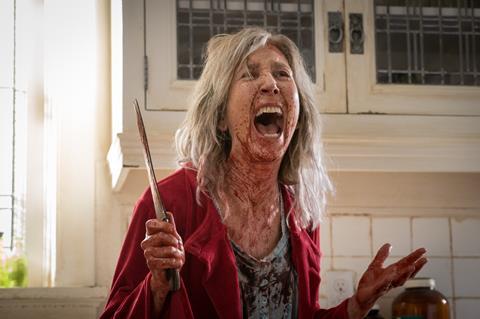 The characters in The Grudge can’t shake a nasty curse, and likewise this reboot feels chained to tired old horror conventions that won’t let go. Based on the popular 2002 Japanese film Ju-On, which birthed two American remakes, this new film is higher in atmospheric dread than outright gore, and director Nicolas Pesce has some skill at creating an aura of unease. But despite an impressive cast including Andrea Riseborough, this Grudge is largely forgettable — neither chilling nor character-driven enough to work as horror or drama.

Releasing January 3 in the US and January 24 in the UK, this Sony offering will hope to come close to matching 2004’s The Grudge ($187 million worldwide), although the commercial returns for 2006’s The Grudge 2 ($71 million) seem more likely. The cast includes acclaimed actors such as Riseborough, Demian Bichir and John Cho, and genre audiences uninterested in prestige awards fare or Rise Of Skywalker may give this a try. Still, lack of buzz could dampen theatrical prospects.

Set mostly in 2006, the film introduces us to Muldoon (Riseborough), a widowed mother and police detective who has moved to a new town with her young son, teaming up with a grizzled partner (Bichir) who is investigating a strange murder. Their investigation leads to a home with a sinister past: In flashbacks to 2004 and 2005, we see, respectively, the tale of a kindly realtor (Cho) trying to sell the house and a compassionate woman (Jacki Weaver) who provides assisted suicide to those wanting to end their lives. Muldoon must figure out how these people met a grisly end — and how it connects to her own disturbing visions of malevolent children and rotting corpses which walk.

In his 2016 debut The Eyes Of My Mother Pesce demonstrated an ability to wring haunting, primal images from an almost folkloric story. On occasion, his Grudge has a similarly mournful, spooky quality, but there’s very little here that hasn’t been explored more successfully in other recent horror pictures. It’s hardly a novel concept for films of this ilk to draw a link between horror and grief — to suggest that the shocks are an outward manifestation of profound loss — but Pesce (who also wrote the screenplay) tends to linger on the obviousness of these observations, offering little new in terms of surprises.

In a larger sense, though, The Grudge simply feels passé, part of a bygone horror trend of American films remaking their Japanese counterparts. (At the beginning of this century, The Ring and The Grudge capitalised on a strain of supernatural horror that featured pale children and unstoppable, inexplicable curses.) This new Grudge sports a deliberate, stylish approach — we’re meant to become invested in these characters’ private dramas, seeing them as real people, not horror-movie types — but the jumping back and forth in time adds little suspense. Instead of one mediocre storyline, we have three, and for audiences familiar with the franchise, it’s easy to guess exactly where Pesce is taking us.

As a detective still reeling from the recent death of her husband, Riseborough does what she can with flat material, but her character isn’t particularly compelling. This is a problem for her castmates as well: Pesce’s commitment to making The Grudge a human story with a minimum of supernatural shocks tends to leave the actors playing bland individuals in moderately scary circumstances. Even the reliable presence of Lin Shaye, the matriarch of horror actresses, as an ailing woman does little to add class or gravitas to the proceedings.

Also disappointing is the arbitrariness of this curse’s wave of destruction. Once it becomes apparent that the house is a conductor, of sorts, for evil energy, the individuals who cross its path don’t add up to much thematically — they seem so random (and unremarkable) that their fates aren’t all that concerning. To be sure, each is contending with a personal hardship, but Pesce doesn’t make those plights universal or resonant. By the time the clichéd creepy kids start putting in an appearance, you’d hardly begrudge anyone who decides they’d rather skip this dull rehash.

Screenplay: Nicholas Pesce, story by Nicholas Pesce and Jeff Buhler, based on the film Ju-On: The Grudge written and directed by Takashi Shimizu