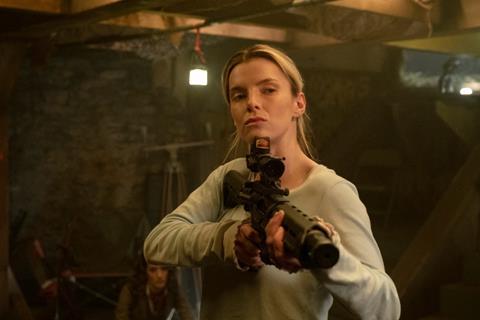 The Hunt is the cinematic equivalent of watching strangers argue on the internet about politics: It’s fleetingly amusing but, ultimately, not the best use of anyone’s time. This action-thriller, which was initially slated for a September 2019 release until Universal pulled the plug in the wake of deadly mass shootings in Ohio and Texas and heavy criticism from conservatives who objected to the film’s satirical storyline longs to be a sardonic statement on our fractious times, following a group of red-state Americans who are hunted for sport by liberal elites. But, for all its provocations, director Craig Zobel’s tongue-in-cheek B-movie proves toothless, trapping us with a group of characters who, no matter your political leanings, are largely tiresome.

Gilpin plays her character with a knowing wink, acknowledging how over-the-top and preposterous the proceedings are

Arriving in UK theatres on March 11 before hitting US screens two days later, this Universal offering will hope to draw viewers who want to see what the fuss is about. (And it’s very possible a good portion of that crowd may be liberals who want to hit back at President Donald Trump’s condemnation of The Hunt sight unseen.) There’s not much star power here, though, and the film will face direct competition from the Vin Diesel actioner Bloodshot. The controversy surrounding this movie may end up being more notable than the grosses.

The Hunt introduces us to 12 random conservative Americans, including Betty Gilpin’s steely Crystal and Ike Barinholtz’s gun-loving Staten Island, who wake up in a forest clearing, unsure what happened or where exactly they are. (Because many of these conservatives never mention their name, they’re identified by a distinguishing characteristic.) Soon, they realise that they’re being hunted by a group of snooty liberals, led by Hilary Swank’s Athena, and must run for their lives.

Inspired by Richard Connell’s 1924 short story The Most Dangerous Game, Zobel has set out to craft a nasty little thriller in which our loyalties are constantly torn. Crystal and her cohorts are innocents trying to stay alive, but many of them are also bigoted and small-minded — while the supposedly enlightened, progressive liberals are the ones meting out cruel punishment. Zobel, who more expertly subverted viewers’ expectations in Compliance, seems to be skewering the biases of his presumed liberal audience, making them (or, rather, us) recognise their hypocrisies.

Done right, that could be a pointed premise — and confirmation that real-life conservatives’ displeasure with The Hunt was misguided — but Nick Cuse and Damon Lindelof’s screenplay has little insight or edge. We hear a lot of trendy, name-calling buzzwords — cuck, snowflake, deplorables — but the film never sees these characters as anything more than caricatures. The hunted are hicks and rubes, while the elites are smug and ineffectual; all clichés who haven’t been depicted in a funny way.

As a result, The Hunt only works when it’s a mediocre shoot-‘em-up, but although Zobel and editor Jane Rizzo construct a few diverting fight sequences, it’s hard to muster up much enthusiasm when hardly anyone on screen is particularly interesting.

The one exception is Gilpin. Her character may be a stereotypical badass action heroine, but the GLOW actress brings some welcome wit. Judged by her skill with firearms and sarcastic one-liners, Crystal could have walked out of a Quentin Tarantino flick, and Gilpin plays her with a knowing wink, acknowledging how over-the-top and preposterous the proceedings are. Like Swank as the rich, coldblooded liberal Athena, Gilpin understands that to take much of this seriously is an exercise in futility. When these two women finally face off it’s trashy and silly, but at least their scenes have a little pulpy pleasure.

The Hunt’s creaky plot isn’t meant to be closely scrutinised, as can be judged by Nathan Barr’s mockingly hyperbolic score and some of the supporting players’ central-casting hammy performances. One suspects that Zobel is milking stale genre conventions — gory deaths, flinty dialogue, ludicrous twists, corny jokes — to make fun of our political partisanship, essentially arguing that both sides are equally ridiculous.

For that strategy to work, though, The Hunt would have had to be a lot more wicked fun than it is. Instead, we get a lot of forced comical commentary that targets the left and the right’s most obvious foibles. Rather than making these bitterly divided sides see how much they have in common, the movie mostly works as an argument that hell is other people — even those whose politics you share.