A middle-aged woman finds herself consumed by the past 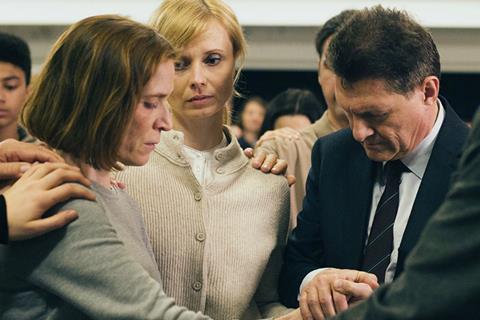 Nothing is truly literal in The Innocent, and very little may be real

Built on a sometimes elusive, sometimes obtuse narrative, this slow-paced Swiss/German film poses continuing questions – although the largest will likely be whether it can move beyond the festival circuit. Premiering at Toronto, director Simon Jaquemet’s second feature, following 2015’s War, is carried by the stark, stripped-bare performance of Judith Hofmann as Ruth.

A haunted, hollow-eyed fortysomething, Ruth saw her lover sent to prison 20 years before, charged with murder. Since then, she’s left her cosmopolitan life behind, taking a dull job at a medical laboratory. Grimly married, with two teenage girls, her only release comes at a Christian church, where speaking in tongues and casting out demons are regular parts of the services. But now it seems as if Ruth herself is becoming possessed – if not by the devil, then certainly by the past.

That short synopsis makes The Innocent seem more straightforward than it is. In fact, it’s often a perplexing film, combing Calvinist spiritual fervor with inexplicable human violence – mixing one part First Reformed to two parts The Killing of a Sacred Deer while, unfortunately, failing to provide the cogent themes or philosophy of either.

Central to the story’s mystery is Ruth’s former lover, Andreas (an enigmatic Thomas Schűpbach). Was he guilty or innocent? And where is he now? Ruth first hears he’s been released from prison, then is told he died in India. So who is it that she keeps seeing in her living room? Who is it, then, who’s been making love to her?

Jaquemet keeps the unanswered questions coming, while cocooning his film in a blandly surreal style. Every part of Ruth’s world – her home, her lab, her church – has the same otherworldly look, with empty rooms and endless hallways. Emotional moments are washed in cold blue or hot red light. As dreamy as the settings are, however, the story itself soon takes a nightmarish twist. The sterile lab where Ruth works turns out to be performing bizarre, Frankensteinian research on head transplants. A laying-on of hands at her church leads to a literal trip into Hell.

But nothing is truly literal in The Innocent, and very little may be real. It’s the sort of film which may offer more rewards on a second viewing, when audiences will be able to see the method behind some of Ruth’s madness – and the madness in some of what’s been presented as reality. Unfortunately, though, of all the things in The Innocent, the idea that anyone would sit through it twice may be the most farfetched.