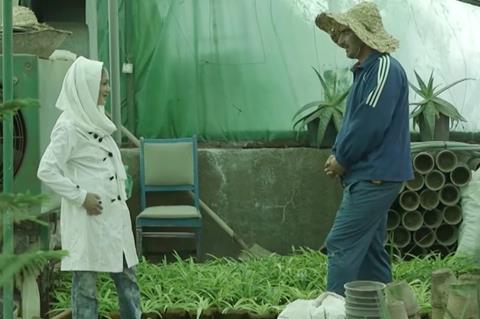 Iranian documentary The Marriage Project is nothing if not thematically rich. As well as offering an intimate portrait of a closed community and the people who inhabit it, the film raises questions about psychiatric ethics, mental illness, gender politics in Iran and the search for love. The film is potentially so rich, in fact, that viewers may be frustrated by the concise running time, as well as by a confusing structure in which co-director Atieh Attarzadeh muses on her own emotional travails, relating her history to the experiences of her subjects, who are residents of an Iranian home for mental patients.

Certain private moments remind us of how rarely we see such scenes between the sexes in Iranian cinema.

The Marriage Project should find an appreciative audience screening online in the Thessaloniki Documentary Festival, but a tougher focus might have benefited its chances beyond initial exposure.

The documentary’s focus is Ehsan’s House, an Iranian psychiatric institution which is home to 500 patients, many long-term. During the film’s timespan (2017/18), the institution hosts an experiment conducted by its director, Dr Farhad Ramezanejad, who hopes to organise marriages between a number of male and female patients in order to address their emotional and sexual needs. Many of his colleagues, however, oppose the project for a number of reasons: some argue that it is unwise to let patients who may be psychotic to marry, while others cite objections from families or raise ethical questions.

Those concerns prove valid given that the centre’s staff will decide which patients are eligible, and who makes a compatible match. But the patients themselves are highly enthusiastic, either because they would like to get married in the abstract or because they have specific partners in mind. The latter is certainly the case with two patients who have been close for years — a man named Seyfolah and a younger woman named Sahar, whose intense attraction clearly causes her pain as well as inspires hope.

Sahar’s presence bespeaks psychic and emotional damage as much as it does a fierce passion for life; she is one of the film’s central figures, along with an older woman named Marjan, another prospective candidate for the scheme. In the end, six patients are chosen and paired up — but one unexpected issue arises concerning the effect the experiment has on candidates who won’t make the cut.

Directors Attarzadeh and Hesam Eslami — he had already started filming before Attarzadeh came on board — have secured remarkable access to Ehsan’s House and won the confidence of the patients, who are manifestly comfortable around the camera. With access to dormitories and other social spaces, The Marriage Project follows its subjects in intimate moments such as a fortune-telling session among the women. Indeed, the film gives more attention to the centre’s female patients as a community, with the men, who are generally more reticent, coming across as somewhat sketchily defined individuals.

Certain private moments, such as Sahar and Seyfolah’s happy interlude in a greenhouse, remind us of how rarely we see such scenes between the sexes in Iranian cinema. By contrast, a disturbing sequence shows a social worker visiting Marjan’s brother to ask his permission for her to participate in the scheme; while the camera stays outside the house, the off-screen conversation reveals much about women’s situation in a traditional patriarchal culture.

The most problematic aspect of The Marriage Project is that Attarzadeh weaves in a personal, confessional strand, incorporating private video footage she shot years earlier. Telling us how she identifies with her female subjects’ search for love, she recounts the mental problems that led to her former husband being institutionalised, and admits that she half-expects him to turn up among the male patients of Ehsan’s House.

However, the emotional charge and the potential thematic resonances of this strand are somewhat lost because it feels as if Attarzadeh is intrusively shoehorning her own experience into the film — suggesting a thin line between solidarity with these women’s ordeal and a discomforting appropriation. (Intermittent use of a moody cello-laden score feels over-dramatising as well.) Overall, a more consistently detached observational approach might have best served the film’s subject from a journalistic perspective, without sacrificing its emotional impact.