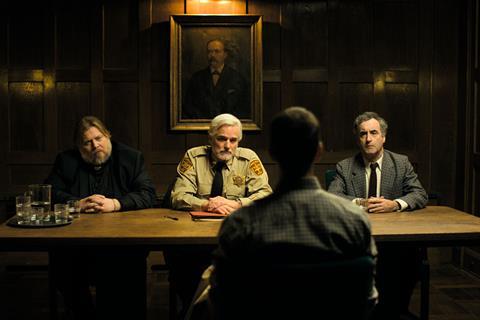 In a community plagued by inexplicable (and almost invariably fatal) accidents, Frank (Pål Sverre Hagen) has one of the toughest jobs in town. He is “the middle man”, the individual who is tasked with delivering the bad news to the families of the victims of the relentless ill fortune of Karmack, a small town in an unspecified corner of America. The latest feature from Norwegian director Bent Hamer is an off-beat oddity. Although it’s delivered in the English language, this is a film with a Scandinavian accent, both in the performances – much of the cast is from Norway, Sweden or Denmark – and in the wryly melancholic humour. The result is a story which seems slightly unmoored and enigmatic. There’s an issue, too, with some of the attempts at gentle comedy: while death can often be mordantly hilarious, grief is rarely so. And this is a film which, however drolly it is framed, is steeped in grief.

An intriguing film which maintains an air of mystery – is it an allegory? If so, what for? – but fails to discount the possibility that it’s all ultimately a little hollow.

A regular at TIFF since his debut Eggs (which won the FIPRESCI prize at the 1995 festival), Hamer returns with a film which was adapted from a novel by Norwegian-Danish writer Lars Saabye Christensen (’King Of Devil’s Island’). The setting in the US is something of a red herring (in fact it was shot in Ontario and Germany) in that the film’s quirky unconventionality may mean that it is better suited to audiences in Northern European territories than to those in North America. Further festival screenings seem likely and a Norwegian release is slated for late September.

The job, coming after a long period of unemployment, is a relief to Frank, who permits himself the rare treat of a T-bone steak (or more accurately half a steak – the austerity of his three years without work is hard to unlearn) to celebrate his new position. His interview takes place in the city hall (its flag permanently at half mast since there’s rarely nothing to mourn) with the three town luminaries: the doctor (Don McKellar), the priest (Nicolas Bro) and the chief of police (Paul Gross). But it’s with Blenda (Tuva Novotny), the quizzical, bright-eyed City Hall receptionist, that Frank forms a connection. This nascent romance brings with it certain baggage. Blenda’s ex-boyfriend, the abrasive and unlovely Bob (Trond Fausa Aurvåg) was the other contender for the job of middle man; he has taken the dual rejections badly. His vitriol sets in action a chain of events which claims Frank’s best friend Steve (Rossif Sutherland) as collateral damage and unleashes the tensions stewing in this buttoned up community.

The film is certainly visually arresting. The colour palette is a striking combination of lemon yellows and teal blues – Frank and Blenda in particular always seem to be coordinated. And the backdrop, a horizon full of chimneys billowing smoke which rests on the town like a pall of misfortune, is effectively used. But other decisions are less successful, particularly in the somewhat trite and sentimental score. It’s an intriguing film which maintains an air of mystery – is it an allegory? If so, what for? – but fails to discount the possibility that it’s all ultimately a little hollow.