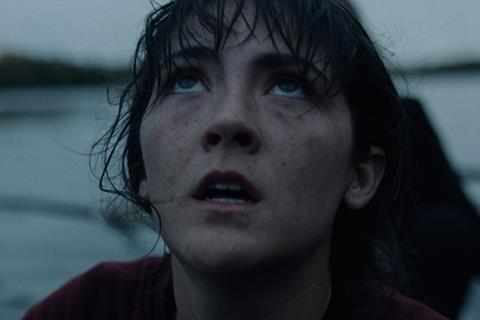 A college student’s quest to become an elite member of her school’s rowing team provides the narrative engine for The Novice, an intriguingly enigmatic character study that casts a critical eye on society’s obsession with excellence. Orphan star Isabelle Fuhrman boldly pushes her troubled character to greater and greater extremes, daring the audience to recoil at the lengths this young woman will go to reach her dream. Although sometimes unsteady — not to mention predictable — writer-director Lauren Hadaway’s feature debut is an anxious examination of the dark side of believing that  hard work is always the solution to fixing one’s problems.

Alex Dall (Fuhrman) is a college freshman who, for unexplained reasons, tries out for the rowing team, despite having no prior experience. Nonetheless, Alex is determined not only to be picked for the squad but to make the varsity team, rigorously training all hours of the day at the expense of any semblance of a personal life. But she soon finds herself competing for a spot with fellow freshman Jamie (Amy Forsyth), who’s much more of an athlete than she.

Thousands of inspirational sports films focus on lovable underdogs who defy the odds to become champions, but Hadaway (a former collegiate rower) slyly subverts those tropes. For instance, it’s not initially clear why Alex wants to be part of the rowing team — or even if she likes the sport. Fuhrman transforms her character into a blur of stubborn, bristling ambition but, because Alex’s motivations are initially opaque, there’s intentionally nothing rousing about her compulsion to remake her body into that of an expert rower. Where pictures such as Whiplash and Black Swan follow a driven protagonist practically killing themselves in pursuit of a passion, Alex is largely a mystery; her objective seemingly derived from some secret mania.

Eventually, Hadaway starts to reveal her character’s rationale, which shouldn’t be spoiled. What’s most fascinating about The Novice is that the filmmaker’s explanation isn’t entirely logical — and yet, it’s a testament to Fuhrman’s performance that she makes the viewer understand what should be counterintuitive about Alex’s reasoning. The actress plays this aspiring rower as so strong-willed that she’s practically a force of nature — someone so intimidating and potentially ill-adjusted that no one wants to get close to her. (The one exception is Alex’s beguiling teachers-assistant Dani, played alluringly by fashion model Dilone, who manages to pierce her hard exterior.)

Assisted by cinematographer Todd Martin and co-editor Nathan Nugent, Hadaway tries to convey Alex’s increasingly feverish mindset by incorporating dreamlike vignettes and visual motifs — most notably, the repeated image of a crab, which is a reference to “catching a crab,” sports slang for a rowing accident. The Novice superbly amplifies Alex’s suffocating drive to excel, although these cinematic flourishes can sometimes be so overheated that they lose their potency.

Additionally, The Novice may be unblinking in its exploration of its protagonist’s ruthless desire to make the varsity squad — an obsession that imperils her health — but the takeaways aren’t so different from similar cautionary tales about singleminded strivers. Likewise, as harrowing as it might be to see Alex push herself — understanding that her drive is built, in part, on her assumption that she has to outwork her teammates because she’s not as talented — where the story ultimately goes isn’t particularly surprising.

But even when The Novice stumbles, Hadaway hits on something disquieting about a culture that places such a burden on young people to be great that they put themselves through punishing extremes. As much as The Novice is a grim anti-inspirational sports film, it could also be viewed as an addiction drama, with Alex getting hooked on the pain she endures to become the best. Normally, we’re invited to cheer on the gruelling sacrifices an underdog makes to chase a dream — Hadaway and Fuhrman question if what we consider commendable might actually be a sickness.