'The Other Story': Toronto Review 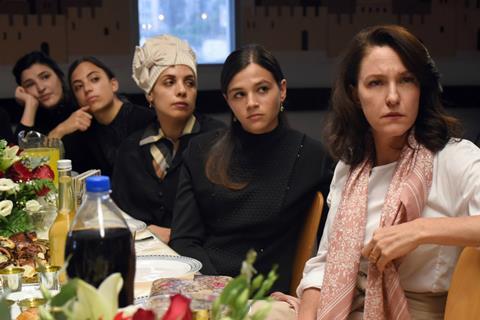 Family conflicts speak to much wider divisions in society in The Other Story, Avi Nesher’s warm hearted ensemble drama which deftly explores an age that is all too quick to label, judge and condemn what it doesn’t understand. It may veer towards the melodramatic but the latest work from the prolific Nesher underlines his track record of consistently creating engaging, thought-provoking reflections on modern life with broad commercial appeal.

Nesher claims to have taken some of the inspiration for The Other Story from the growing phenomenon of ‘hazara betshuva’ (returning to faith) where young secular Jews are turning to orthodox Judaism. That is certainly true of Anat (a fierce Joy Rieger) who has renounced her hedonistic youth in Jerusalem to devote herself to the study of the Torah and a pure life; a decision deeply resented by her mother Tali (Maya Dagan) and grandfather Shlomo (Sasson Gabai).

Her forthcoming wedding to singer Shahar (Nathan Goshen) is considered the final straw. He was once a raunchy pop star but is now strictly orthodox, crooning soulful odes to the wisdom of the Torah. In a desperate attempt to win back Anat, the family call upon her neglectful father Jonatan (Yuval Segal) who returns from America charged with finding some flaws in the too-good-to-be-true Shahar.

Nothing is quite as simple as it appears on the surface. Anat is committed to her choices and feels that nobody, least of all her unreliable father, has the right to challenge her. Jonatan’s visit allows him to escape a bruising lawsuit in America. Tali clearly retains some feelings for her ex-husband even if she greets him by throwing a glass of red wine in his face. Proud father Shlomo is just as happy to have Jonatan sharing his house once again as he is at the thought he might actually put a stop to Anat’s marriage.

Nesher and co-writer Noam Shpancer pepper the dialogue with some snarky one-liners and effectively build the layers of the story and tighten the tensions. Psychiatrist Shlomo convinces his son to join him in providing counselling sessions for a couple in crisis. The wife has involved herself in a quasi-feminist cult dedicated to breaking the chains of patriarchy. The husband fears for the safety of their young son.

The wider themes of the film grow more evident through individual elements in which nobody is prepared to listen to the other side of the story, or try to understand a different point of view. The therapy sessions and legal issues  are vaguely reminiscent of Asghar Farhadi’s A Separation but Nesher is a much broader storyteller, inching towards soap opera in some of the emotional encounters and convenient coincidences that propel the narrative.

Ultimately, The Other Story becomes a reflection on how interfering parents must face the consequences of their actions and how nobody has a monopoly on virtue. The rather too tidy ending and the syrupy score of Cyrille Aufort push towards the sentimental, but the result is still an involving plea for peace, love and understanding.