‘The Painter And The Thief’: Review 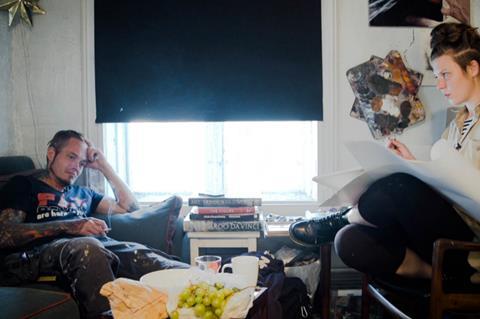 A painted portrait tries to capture its subject in two dimensions. The Painter and the Thief sees its subjects in multiple ones, going ever deeper and broader as it approaches its characters from different angles, discovering different sides while still searching for a single answer. Premiering at Sundance this January and now on streaming platforms, this second feature from Benjamin Ree (Magnus) focuses on an odd couple and the even odder situation that brought them together. Unfolding slowly, mostly in English, it’s an intriguing tale of lost souls and found redemption that could provide a unique change of pace for specialty cinemas and home screens.

Ree uses dramatic devices to tell this tale, structuring the documentary a bit like a novel

It all begins when artist Barbora Kysilkova, a struggling Czech emigre, lands a gallery show in Oslo. Except her big break is ruined by a break-in, and the theft of two enormous canvases. Thanks to security cameras, police eventually solve the crime. But where’s the art? When asked, the elaborately tattooed thief Karl-Bertil Nordland simply shrugs. He was full of amphetamines and hadn’t slept for four days, he confesses. That whole month was kind of a blur. He doesn’t know what happened to the paintings. He does remember he liked them a lot, though. The police declare the case closed.

But it’s still open to Kysilkova. Fascinated by her unlikely, illegal, admirer – after all, a fan is a fan – she seeks Nordland out at his trial and asks if he’ll sit for her. And as he poses in her Norwegian studio, hour after hour, he starts to tell her about his life – a rural childhood, a bright academic career, and then drugs and despair and self-destruction. She listens closely, paints obsessively. And slowly she becomes drawn into this outsider’s life, eventually sticking by him as he wends his way through the legal system, giving him food and hugs and endless emotional support.

Art, like drama, often depends on contrasts – light and dark, soft and sharp – and Ree finds them in Kysilkova, the gently smiling artist and Nordland, the punk-rock criminal. But Ree finds similarities between them, too. Nordland admits to a childhood full of “trauma”; Kysilkova came to Norway fleeing a physically abusive lover. They have known pain, and they hate to see it in others. We gradually understand the attraction between these two damaged souls – even if Kysilkova’s current boyfriend is increasingly aggravated by it.

Ree uses dramatic devices to tell this tale, structuring the documentary a bit like a novel. First, we get Kysilkova’s point-of-view, watching her as she views the news of the burglary, standing behind her while she creates her huge, photorealist paintings. Then, we switch to Nordland’s, following him into prison, then outside as he tries to rebuild his life. Some scenes are repeated from different perspectives; sudden revelations are followed by flashbacks, filling in details. (Particularly surprising for many audiences will be the peek inside Norwegian penitentiaries, where cells look more like hotel rooms, and prisoners go for long walks in the woods.)

Cinematographer Kristoffer Kumar makes the most of Kysilkova’s haunted canvases, while Uno Helmersson’s music swells evocatively during emotional moments. Sometimes, though, Ree’s almost passive patience – the film was shot over three long years – lets things drag, while leaving questions hanging in the air. The details of Nordland’s arrest, trial, and sentence are awfully vague; the exact parameters of his relationship with Kysilkova are difficult to determine. Is he her muse? Her personal project? Her lover? It’s hard not to share her boyfriend’s doubts about the healthiness of this arrangement. Is Kysilkova simply Nordland’s staunch defender or has she become his co-dependent?

But, The Painter and the Thief suggests, human relationships are complex and multidimensional things. And whenever you foolishly start to try to contain them in a simple frame, they stubbornly burst out.