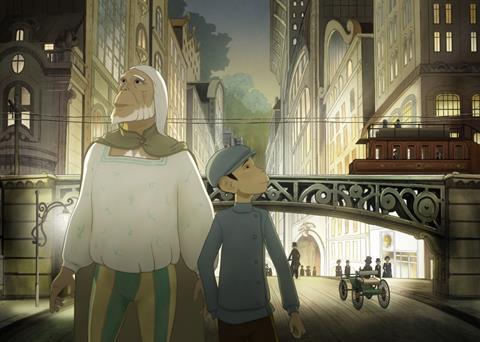 An exotic outsider’s mere presence is threatening to a blinkered, conformist society in The Prince’s Voyage (Le Voyage Du Prince), a thoughtful, philosophical fable that represents a “sort of sequel” to co-director Jean-Francois Laguionie’s 1999 film A Monkey’s Tale (Le Château Des Singes). Laguionie (The Table, Louise In Winter) received an Honorary Cristal Award at Annecy where The Prince’s Voyage received its world premiere. It should readily attract longterm fans of his work and those seeking animation with sophisticated substance as well as a distinctive style.

The Prince’s Voyage begins when Prince Laurent is washed ashore in an unfamiliar land. Rescued by kindly young monkey Tom, he is given shelter by disgraced Professor Victor Abervrach and his botanist wife Elisabeth. Laurent is a monkey just like them. He is cultured and intelligent but delights in playing the primitive to frustrate the Professor. Abervrach regards him more as an interesting specimen that could prove the key to regaining status among the academics who ridiculed his theories of different communities existing on the same planet.

Part of the charm of The Prince’s Voyage lies in the attention to detail. Victor and Elisabeth have taken refuge in a gloomy museum in the middle of a forest that is slowly engulfing the building and is a threat to the entire city. Gnarled branches invade the stone work, tendrils creep through windows and walls. There is a sense of this wilderness as an enemy at the gate, promising to return their civilisation to a primitive state.

The dignified, curious Laurent has a bond with Tom as they start to learn each other’s languages and the circumstances that brought them both to the Professor. It is Tom that takes Laurent out of the house and into a city that has all the marvels of electricity, buses and a Circus Of Fear where the attractions include a silent motion picture modelled on the thrills and poignancy of King Kong.

The Prince’s Voyage will delight film buffs with its many movie references. A flashback to Laurent’s life as a warrior Prince revolves around a battle fought on ice that conjures up Alexander Nevsky (1938). There are inevitable echoes of The Planet Of The Apes as it explores the divisions within communities of simians with conflicting values and beliefs about the world in which they live. There is also an element of Edgar Rice Burroughs’ Tarzan with the proud and wise Laurent rejected by polite society and treated as a monster from the jungles who deserves to be caged and even executed.

Ultimately, The Prince’s Voyage is a series of adventures that promotes friendship between the generations, the need for tolerance of others and the desire to acknowledge what binds monkeys (and people) together rather than what tears them apart. A final story element in which the Prince and Tom discover a treetop community of monkeys feels as if it could have been developed further. It does mean that The Prince’s Voyage is one animated feature that leaves the viewer wanting more.