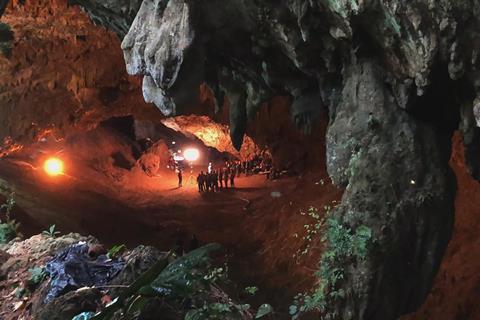 Saving a dozen Thai schoolboys trapped in flooded caves became a gripping story of triumph against all the odds in summer 2018. The Rescue revisits those events, deepening our understanding of what it took to achieve the miracle of their liberation. Free Solo wife and husband directors Elizabeth Chai Vasarhelyi and Jimmy Chin are forensic in the detail they provide and the range of testimonies they have assembled; the result is a tense, absorbing documentary with a strong emotional charge.

The Rescue does not tell the story of the boys from the Wild Boar Soccer Team or the anxious families waiting for any glimmer of hope. Instead, it places the focus firmly on the rescuers. If it takes a village to raise a child then it takes a small international army to mount a rescue mission. The sheer scale of the numbers involved (5,000 Thais alone) and the role of key individuals is vividly brought home in interviews with members of the Royal Thai Army, the Thai Navy SEALS, Thai politicians, English cave divers, an Australian doctor, a Belgian volunteer and American Air Force Pararescue veterans. The filmmakers have cast their net as wide as possible to achieve what feels like a definitive account of what happened.

The 12 young footballers and their coach were trapped inside the lengthy Tham Luang Nang Non cave system after flooding blocked all the exits. The film is structured around the ticking clock of days racing past and nobody knowing if the missing group were even alive. The imminent arrival of the monsoon season meant that the chances of survival were considered slim.

Water is a constant presence in the film. It is a source of great beauty and an unstoppable destructive force. We see drips and drops forming into rivers; showers casting spider’s webs in the forest; hefty rainfall becoming raging torrents, churning muddy brown as they sweep aside everything in their path.

The world’s media descended on Thailand to cover the story, giving the filmmakers a vast resource of news footage. They go beyond that to place the viewer in the cave network, swimming cautiously through tar black waters, arriving at slender pockets of air and finally reaching the smiling, stoic boys. Finding them was the easy part. The Rescue offers a striking evocation of how dangerous the situation was and how impossible the thought of a successful outcome seemed.There are moments when you stop to consider how on earth they managed to have film of all this; closing credits confirm that some scenes were recreated by the original participants.

The nerve-jangling rescue required cool heads and nerves of steel, and those qualities are evident in abundance with cave divers Rick Stanton, a retired fireman, and John Volanthen, an IT consultant. The realisation that the situation required an expertise beyond the skills of the military and navy divers may well have been the key to saving the boys. Stanton, Volanthen and their fellow amateur divers exude a remarkable calmness and grace under pressure; their ability to crawl through the darkest corners and devise the boldest of plans was clearly what saved the day.

This is a film that leaves you filled with admiration for the stoical boys and the quiet heroism of those who risked their lives to save them. The addition of a tearjerking closing credits ballad Believe by Aloe Blacc feels like overkill in an otherwise composed, focused film that wisely opts to meticulously convey the facts.