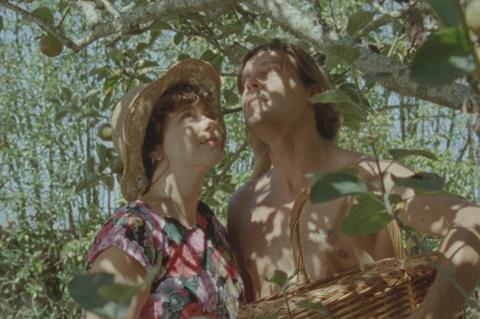 ‘Tsugua’ is not a place, it’s more a state of being – and it’s also the word ‘August’ in reverse. It gives its name to a film made largely in August – in Portuguese, ‘Agosto’, hence the original title Diários de Otsoga – by experimentally minded duo Maureen Fazendeiro and Miguel Gomes. Fazendeiro is known for her documentaries (Black Sun, Motu Maeva) while Gomes has become a festival favourite with his hybrid fictions (The Arabian Nights, Our Beloved Month of August). So, given their respective approaches, it’s fair to be perplexed about the specific nature of their very ludic collaboration – which could be seen as a either a documentary about the making of a fiction film, or a fiction about a documentary, or both. Either way, this intensely meta, but very laidback experiment in COVID-era cinema is one of the more idiosyncratic highlights in this year’s Directors Fortnight, and while it’s too wilfully esoteric to have the niche commerciality of previous Gomes films like Tabu, festivals should take to it warmly.

The film, a closing caption tell us, was shot in lockdown in August and September of 2020. An exercise in reverse chronology – a concept that characters discuss perplexedly in one scene – it begins with a caption reading ‘Day 22’, then counts down to Day 1. The first day we see shows us three youngish people - a woman, Crista (Crista Alfaiate) and two men, Carloto and João (Carloto Cotta, João Nunes Monteiro) – having a small party of their own, dancing to the Four Seasons’ ‘The Night’ in a room mysteriously lit with ever-changing coloured glows from outside.

The scene ends with Crista in a clinch with one of the men, observed by the other – seemingly the end point to a 22-day process, as we then skip to the previous day, as one character suggests the three have a party. They stand on the roof of a house, gazing at the sea – if the sea is really there, that is – before Carloto, in a horror movie villain’s voice, bafflingly declares, “The mystical droplet is about to come loose” – and then the trio watch some butterflies in a greenhouse.

The film proceeds in this enigmatic, whimsically laid-back vein, and as the days flicker by – sometimes at length, sometimes in brief fragments – we get a fuller sense of what’s going on. We see the trio building the butterfly house, the location expands to reveal itself as a large quinta, or manor, apparently functioning as a hotel. Gradually more people appear, both hotel staff and the crew of a film that’s being made by none other than Fazendeiro and Gomes, who both appear (something of a trademark with Gomes).

Just as the latter’s 2008 Our Beloved Month of August began as an ostensible documentary about rural Portugal, then switched into fiction mode, conversely this film seems to be a fiction at first, then becomes a documentary about itself. The three main actors appear, to all intents and purposes, to be the characters they are playing, and at various points, members of the crew – including sound recordist Vasco Pimentel, a Gomes regular – step in to perform, and to break whatever fragile residue of a fourth wall remains. The metafilmic dimension is signalled by a glimpse of a whiteboard chart, on which this seemingly impromptu film turns out to be mapped out sequence by sequence, with co-writer Mariana Ricardo also a presence (she’s credited with Fazendeiro and Gomes as a part of the film’s ‘central committee’). Meanwhile, with echoes of Victor Erice’s The Quince Tree Sun, the passing of time is denoted by still lives of fruit in various stages of decomposition – backwards, of course.

The film feels like a sidebar in the context of Gomes’s work – certainly compared to the monumental sprawl of The Arabian Nights – but it’s very much of a piece with it, emerging ingeniously and mischievously out of the challenge of lockdown just as that film responded to Portugal’s economic crisis. It’s a minor pleasure, but a highly engaging one, with the actors and everyone involved visibly having a good time. Cotta, previously in Gomes’s Tabu, particularly shows the comic touch he brought to Abrantes and Schmidt’s bizarre 2018 comedy Diamantino. Eccentric, non-realistic lighting brings a genuine touch of magic, as does the use of a lyrical instrumental by Portuguese guitarist Norberto Lobo. A reprise of ‘The Night’ closes – or opens - what has proved perhaps the oddest, certainly the most playful product of lockdown cinema.