Debut from Argentina dials up the score but down the surprises 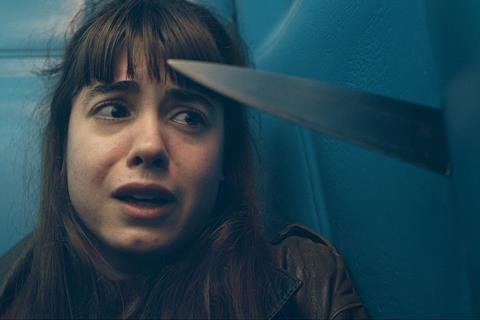 “How can you not have ‘presences’ if you have a funeral home in your house?” Following the advice of a medium, Bernardo (Luís Machín), wife Estella (Celeste Gerez) and stepdaughter Irina (Camila Vaccarini) have learned to co-exist with the unquiet spirits that roam their suburban home. The ghosts that drift through the house, releasing pet hamsters and writing coded messages on the windows, are more an annoyance than a threat, just as long as everyone abides by the rules. But a nervy score which works overtime with stabby violins and moaning voices is just one early indication that the cohabiting spirits might not be quite so benign in this uneven Argentinean first feature.

The idea of bringing a supernatural element to the ‘roommates from hell’ genre is an amusing one, but the film stoically refuses to concede to any comedy

There is an intriguing idea at the heart of this film, but it is too tonally uncertain to gather much momentum. The undertaker’s home might be brim-full of spooks, but the actual scares are few and far between. The film’s premiere at Fantasia could be followed by some interest from Spanish speaking territories.

The idea of bringing a supernatural element to the ‘roommates from hell’ genre is an amusing one, but the film stoically refuses to concede to any comedy. Likewise, the interesting juxtaposition of the banality and inconvenience of a domestic set up which has to work around the particularly haunted bits of the house is steamrollered by overuse, from the very beginning, of horror tropes like a snaking camera, strobing lights and that thunderously unsubtle score.

The pressure of living in the house is taking its toll on the family. Estella, looking permanently harried, keeps up a carping monologue of complaints which only quietens when she knocks herself out each night with sleeping pills. Her daughter, furious that she has to pee in a bucket because the bathroom is too haunted to use, is so mutinously glued to her phone that it takes her a while to peel herself away from the screen to notice the spectral figure which is fumbling with the hamster cage in her room. And lugubrious Bernardo finds that one of the ghostly visitors is far more attentive to him than his wife has ever been.

The first hint that something might be amiss comes after Irina stroppily rejects the pee-bucket and uses the possessed bathroom, thus unleashing something malevolent. There are other hints, too. Like the three coffins which are left ominously by the front door overnight. The medium, Ramona (Susana Varela, impressive), is summoned back and, after her psychic visions reveal some of the back story, delivers the bad news that a demon is on the loose.

A final act confrontation with the forces of darkness makes inventive use of a portaloo in the garden but is otherwise fairly conventional. And, in something of missed opportunity, rather than the gung ho gore onslaught that might have won over genre fans, the film closes with an unexpected ad hoc ballet performance.