‘The Wheel Of Time’: TV Review 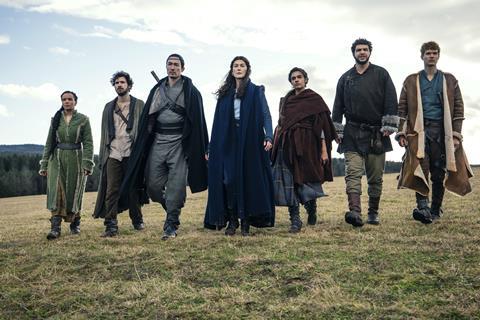 ‘The Wheel Of Time’

Amazon’s much-heralded answer to Game Of Thrones - at a reported $10 million per episode - is also the long-awaited first-ever adaptation of Robert Jordan’s medieval mega-world-building 14-book series of the same name. They both have origins in Lord Of The Rings, The Wheel of Time to a far greater extent, but showrunner Rafe Judkins’ series also throws in everything from the high-minded Narnia books to the cheesiness of Xena, Warrior Princess. It’s wonderful to come across a series like this with a female-dominated narrative, and that feminist drive and sexy, diverse cast will keep some audiences engaged, but the hokey dialogue is only matched by some frankly-dreadful production values which tend to make Wheel Of Time look like a low-rent version of its antecedents, despite the price tag.

Even though she literally sleeps through one episode and has a character who is known for keeping her cards close to her chest, Pike has considerable gravitas and she brings it here

The effects are decent enough - there are some horny-headed, entrail-eating monsters which look like a cross between an Orc and Mr Tumnus - but there’s no escaping the fact that this series looks like it was mostly shot in a rather thin forest outside Prague, while its cities are uniformly empty sets, lacking in texture. Magic consists of wavy chiffon-like effects, and the feminist vibe is somewhat undercut by the decision to delineate the female warriors by the colour of their clothes. If it wasn’t for the older cast of Rosamund Pike, Daniel Henney, Kate Fleetwood, and, later in the series, Sophie Okonedo, it would be hard to find a reason to watch The Wheel Of Time grind its way around full circle. It does eventually bed in somewhat, but not as much as it should.

Six of eight 60-minute episodes were shown for preview; the series, first optioned by NBC more than 20 years ago, was greenlit for a second round while in production, and it will fill a gap until Amazon’s Lord Of The Rings series arrives. If any one thing is needed for the next - apart from higher spec ambitions - it’s characterisation. We are presented with five young people who may hold the future of humanity in their hands, but six hours later they barely have a character between them as the series whips through strand to strand without pausing for breath.

Guiding them is Moiraine (Pike), a Gandalf-like figure who travels with her Warder (bodyguard) Lan (Daniel Henney) to a small-town called Two Rivers which looks remarkably like Hobbiton, to find ‘the Dragon Reborn’ - not literally a dragon, but a person who can access ancient powers to save or destroy humanity. This society, which operates outside our time, believes fervently in reincarnation - the titular Wheel of Time - and Moiraine is a member of the Aes Sedai, a guild of women who can channel the One Power to heal and fight the forces of darkness which are massing on the borders. (Any man who can access it, including a False Dragon, is doomed to death and madness.)

This critical Dragon Reborn has landed in Two Rivers, and may be one of four people who are now 20 years old and played by unknown actors. They are, respectively,  Egwene (Madeleine Madden), her boyfriend Rand al’Thor (Joshua Stradowski), Perrin (Marcus Rutherford) and Mat (Barney Harris). There’s also a local healer woman (a Wisdom) called Nynaeve (Zoe Robbins), who seems to have a crucial part to play, but Judkins’ scenario gives the viewer very little time to bed in with folk at their harvest festival before the Orcas suddenly arrive and start ripping the happy townsfolk to shreds. Moiraine and Lan are hot on their heels, and eventually all go on a gallop through the perils of the forest to the White City, where it is hoped that the leader of Aes Sedai, Siuan (Okonedo), may be able to help. There are rival Aes Sedai factions, however, including the Reds, led by the man-hating Liandrin (Fleetwood).

Also hanging out in the forest is a group of holy Aes Sedai hunters who only wear white, and a band of Irish travellers who call themselves Tinkers — a derogative term which isn’t in use any more, but presumably Judkins has done his homework and feels it’s acceptable in a parallel universe.

There’s a lot of weight for Pike, Henney and Fleetwood to lift in this show, and they are joined at various points in the journey by more experienced character actors in cameo who lend the production the gravitas it needs. Even so, they struggle with some ripe lines: ‘The Wheel weaves as the Wheel wills,’ Pike intones on several occasions. Yet, even though she literally sleeps through one episode and has a character who is known for keeping her cards close to her chest, Pike has considerable presence and she brings it here. Acting as a producer, she is the series’ main asset.

Another element that works in its favour is that, essentially, The Wheel Of Time is the wholesome iteration of fantasy viewing: there’s no need to put an age block on or live in fear that your child has somehow accessed a random incest scene. It can be charming too: with more focus on characterisation and a whole new approach to dialogue, it could run further. It’s an inescapable fact that a series like this will be indebted to the loyal fan base for the books and will need to hit certain beats in order to satisfy that base. Characterisation and dialogue like this shouldn’t be amongst them, however.