Mikko Myllylahti’s debut feature is an unpredictable Nordic oddity that plays in a familiar key of muted, comic surrealism 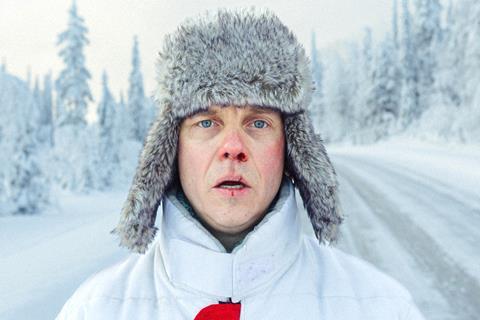 One of the more reliable phenomena of world cinema is the regular appearance of strange but benign UFOs from the North. (One thinks of Bent Hamer’s Kitchen Stories and O’Horten from Norway, or Noi The Albino and Rams from Iceland – a country that seems to send out odder tragi-comical satellites every year.) Now here’s one from Finland – with the famously glum Finnish humour stamped all over it. Deadpan philosophical fable The Woodcutter Story is the first feature by Mikko Myllylahti, best known as writer of Juho Kuosmanen’s The Happiest Day In The Life Of Olli Maki. Starring that film’s lead, Jarkko Lahti, The Woodcutter Story is perhaps too self-deprecating and calculatedly wayward to score the cult prestige it might seem destined for, but fests and platforms with an eye for minor-key weirdness should find it a modestly dependable audience-puller.

One thing that can be fairly said about The Woodcutter Story is that it’s not remotely predictable.

With an ambling narrative comprising two chapters and a prologue, the film is set in a snowbound area of Finland surrounded by mountains and forests. The story begins in a distant, windblown cabin where two representatives of the powers that be – whether corporate or metaphysical – make a deal that will determine the fates of all the characters who live down below. One of them is middle-aged, easy-going Pepe (Lahti), who works in the local sawmill with his burly friend Tuomas (HP. Björkman), and who is proud father to a young son, also named Tuomas (Iivo Tuuri).

One day, the local community learns that the sawmill is to be shut down and a mine established in its place. This marks the beginning of a chain of mishaps that even Pepe – an uncrushable glass-half-full chap – finds hard to deal with. Pepe’s mother (a tour de force of no-nonsense brusqueness from Ulla Tapaninen) dies of an icky-sounding malaise after an encounter with a shaggy mystery beast in the local church. Then Tuomas becomes convinced that his wife is carrying on with the local hairdresser – except that, as a nicely pitched gag suggests, it seems that so is every woman in town.

Events take a surprising violent turn but even this doesn’t frazzle Pepe too much. Now living with his son – in a workers’ dorm, since the family house has burned down – he has a job with the mining company. He is fairly chipper about it all, unlike his co-workers - especially one, a towering streak of anguish who is forever musing on the meaning of it all. Meanwhile, the taciturn young Tuomas falls in love with an incorrigible sourpuss who has now taken over the hairdresser’s. And then along comes Jaakko (a pointedly weird performance by Marc Gassot), a singing psychic with malign aspirations to be a Pied Piper for the town’s population.

One thing that can be fairly said about The Woodcutter Story is that it’s not remotely predictable. The consistent element is Myllylahti’s delicate register of muted, comic surrealism, sustained from the start. It’s a well-established cliché to compare Finnish films to the work of über-lugubrious national auteur Aki Kaurismäki, but here the comparison is unavoidable; the film feels rather like a Kaurismäkian variant on Twin Peaks, with a soupçon of Fargo.

The problem, however, is that Myllylahti doesn’t quite know when a tone of dream crosses over into over-insistent delirium. The outlandish phenomena just keep on coming – a floating ball of light, a fish bearing a message of good cheer, a flaming car seemingly waiting for a driver… All these oddities, at least, are cannily embedded in a context of studied mundanity: if the film is not actually set in the drab ’70s, nevertheless the design channels that decade. Some interiors even feel like they have been cobbled together DIY style, they are so spare – though they are often transformed by being bathed in a variety of red, blue, yellow candy-toned hues. As for the omnipresent snow, it has textures that you can really feel – partly thanks to a meticulous sound mix.

Apart from Gassot’s gawkily demonic Jaakko, the playing is at drolly undemonstrative pitch, especially from the angelic but largely taciturn Tuuri as young Tuomas – which makes it all the funnier when the kid starts holding forth about the human condition. Lahti’s stolid but personable Everyman holds it all together, with an increasing look of just-punched-on-the-mouth bemusement. A slyly ironic score from Jonas Struck (Borg vs. McEnroe) is eerie, deadpan and mock-suspenseful in turn.