A mature and moving story of childhood, growth and identity from Iran’s Anahita Ghazvinizadeh 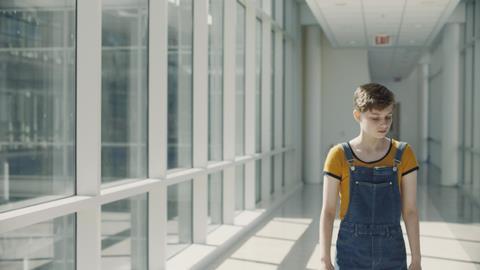 With her debut feature, Iranian filmmaker Anahita Ghazvinizadeh builds on themes previously explored in her trilogy of short films to deliver a mature and moving study of childhood, growth and identity. While her tale of a pre-transition teen struggling with possible gender reassignment may not shout as loudly as other works with similar themes, its subtlety proves to be its greatest strength.

Ghazvinizadeh’s previous festival successes, which includes both the Cannes Cinefondation Award and Chicago’s Silver Hugo for her short Needle, will help They find a home on the festival circuit following its Cannes screening; that Jane Campion is a vocal fan of her work will also do much to raise the film’s profile. Its topical subject matter could also attract specialist distributors, who are likely to be seduced by newcomer Rhys Fehrenbacher’s outstanding lead performance and its director’s assured handling of a sensitive subject.

As the issue of gender transition has become part of the social discourse, the subsequent blurring of traditional boundaries is of increasing interest to the makers of both film (Sean Baker’s Tangerine, Jean-Marc Vallee’s Dallas Buyers Club) and television (Jill Soloway’s Transparent). In her take on this hot-button topic, Ghazvinizadeh has chosen to tread rather more lightly; much like Baker’s far more raucous film, her central character is not defined by their sexuality, rather their personal experiences form part of a wider human story.

Ghazvinizadeh met Fehrenbacher while researching They in Chicago’s transgender community, and the fact that the actor is transitioning from female to male results in a performance that is achingly naturalistic. Haunted and reserved, he plays 13-year-old J who, while born male, is unsure of their true gender and so goes by the pronoun ‘they’, each morning noting down whether they feel like a boy, a girl or, tellingly, ‘nothing’.

On puberty blockers to give J time to decide whether to remain male or transition to female, test results reveal a corresponding decrease in bone density: the blockers must be phased out and a decision has to finally be made. Over the course of a single weekend, in which sister Lauren (Nicole Coffineau) and her Iranian partner Araz (Koohyar Hosseini) arrive to look after J while their parents are away, life-altering choices must be made.

The strength of They comes in its approach. Gender transition may be at the centre of the narrative, but Ghazvinizadeh’s nuanced screenplay widens out themes of individuality and belonging beyond J’s own experience. J’s struggle to find a place in the world is echoed by Lauren, who is trying to decide whether to accept a place on yet another artist’s’ residency or finally settle down, and Araz, who —  despite his impending marriage —  has yet to work out whether he will stay in the US or return to Iran to be with his parents.

That Ghazvinizadeh was a student of countryman Abbas Kiarostami’s film workshops is evident in the film’s enigmatic aesthetic which runs to its wilfully ambiguous ending. No matter; They is a remarkable multi-layered debut which inspires further investigation.