‘This Much I Know To Be True’: Berlin Review 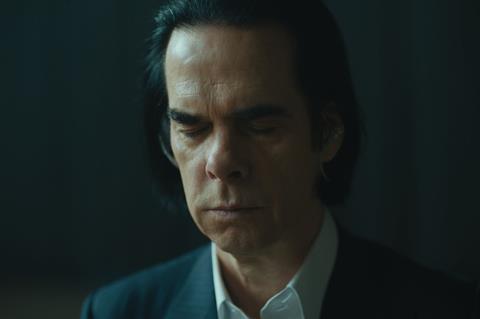 ‘This Much I Know To Be True’

A personal tragedy – the accidental death of his son Arthur in 2015 – prevented Nick Cave from promoting and performing his 2016 album ’Skeleton Tree’. Instead, the work was presented to the public through One More Time With Feeling, an intimate documentary directed by friend and long-term collaborator Andrew Dominik. Five years later and another tragedy, this time a global one in the form of the pandemic, has prevented Cave from performing live, so once again, he connects with his audience through a collaboration with Dominik. This Much I Know To Be True combines immersive footage of a studio session in which songs from two albums, 2019’s ’Ghosteen’ and 2021’s ’Carnage’, are performed, with interviews and intimacies, and a deeper insight into the rich creative partnership between Cave and fellow Bad Seed Warren Ellis. It’s simply executed but undeniably powerful in its lean, stripped back elegance.

A fitting backdrop for Cave’s particular brand of undead chic

An indication of the success of a documentary portrait of an artist and their art is whether the audience extends beyond fans and into those who were hitherto indifferent to the subject’s creative output. With its focus on performed music, this film will definitely appeal predominantly to existing fans, but the quiet wisdom and empathetic reach of Nick Cave the man, is something which may have a broad and profound resonance. Each insight into Cave outside his musical output – his philosophy on personal identity, his slightly bonkers venture into satanic ceramics – deepens the appreciation of his music. Anyone who wasn’t a Cave fan at the start of the film will likely be one by the end. In an ideal world, there might have been more time in the picture dedicated to Ellis, whose jangling, disruptive, slightly feral energy harmonises so brilliantly with Cave’s more contemplative approach, but perhaps that’s for another movie. (That’s assuming audience appetites for Nick Cave films aren’t finally sated after Dominik’s two films, the performance picture Idiot Prayer and Iain Forsyth and Jane Pollard’s 20,000 Days On Earth.)

Filmed in London and Brighton in 2021, the vast majority of the film takes place in what looks like some kind of semi derelict ecclesiastical building. The hazy, crepuscular light in this crypt-like cavernous space is a fitting backdrop for Cave’s particular brand of undead chic. The core of the performers – Cave, Ellis and a trio of backing singers; sometimes a drummer – is grouped in the centre of the room, within a circular dolly track. And the camera, manned by Robbie Ryan, loops around the performance. A lighting rig, set up around the walls pinpoints the musicians with spotlights, and laces the space with a mesh of interwoven beams. At times, the group is swelled by strings. But for the most part, there’s a stripped back simplicity to it all which trains our focus onto the essentials – Cave’s lyrics, the lovely, mournful melodic quality of the music.

The creative bond between Cave and Ellis is central to the film, but another collaboration, with a physically frail but indomitable Marianne Faithful, provides a pivotal moment and an insight into the way the music is created. Cave dismisses the process at one point as “just snippets in an ocean of bullshit”, but even to the untutored ear, it sounds as though some kind of sorcery is at work, shaping a song out of fragments of Faithful’s throaty poetry reading.