'Those Who Fall Have Wings': Review 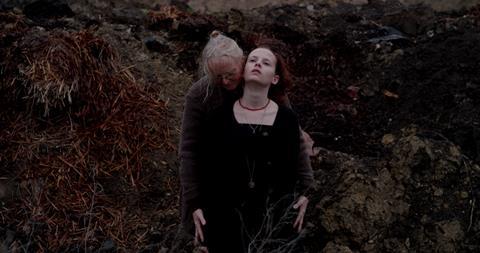 More than anything else this mournful essay on the final departure of a much beloved person person looks like a series of free variations on the Schumann/Heine song I Wept In My Dream, one of the saddest in the Dichterliebe cycle, which accompanies the film’s opening sequence and crops up regularly throughout. No surprise then that the director, Peter Brunner, is also a musician and his film is an attempt to put music into images, with narrative considered superfluous. Those Who Fall Have Wings (Jeder der fallt hat Flugel) will this appeal only to purists who believe film should speak in a language of its own, instead of being chained to the rules and traditions of novels and stage.

It is difficult to imagine general audiences coping with this stream of unabashed, obsessive woe

An elderly woman (the director’s mother, Renate Hild is a luminous presence) is about to say farewell to her two granddaughters, Kati (Jana McKinnon) and Pia (three year-old Pia Dolezal) and eventually prepare them for the time when she will be no longer there. This takes place in her country house, where she lives alone, surrounded by her memories (the film was shot in the house of the director’s late grandmother shortly after her death).

Seen through the eyes of adolescent Kati who cannot perceive a future where she will no longer have her beloved grandmother to lean on, Brunner’s film is replete with moments of sadness and flashes of past recollections, often shown as clips of home movies on TV, with the girl’s misery represented by shots of her lying in the mud of a pigsty or having frequent asthma attacks. Thse alternate with with sweet moments of quiet intimacy between her and the old woman. The images parade in free associative order, rejecting any type of chronology or plot, and much closer in spirit to a musical structure than a film.

References to life and most particularly death (a word that seems to be repeated more than any other in the film) are constantly in play, whether through images observing nature or the dialogue itself. Even the Angel of Death makes an appearance, in the guise of a naked man (Christos Haas), painted black, who is there to collect the grandmother when the time comes.

A very personal kind of statement that is not easily communicated to others, Peter Brunner’s film seems determined to resist any compromise, delivering its messages in sets of symbols and suggestions that are often repeated, like a da capo indication in a musical score. The tone ranges between sentimental melancholia and displays of sheer despondency, with moments of poetic reflections on nature bathed in full summertime sunshine.

It is difficult to imagine general audiences coping with this stream of unabashed, obsessive woe, or struggling to unravel all the symbolic messages conveyed through the gloomy mood which prevails even in the sunnier, more sentimental contacts between the elderly Oma and the two girls. Short of reading it as poetry, where not every single word has to have a meaning, it is their composite effect that finally counts.