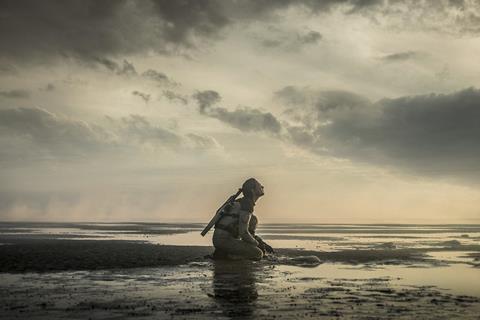 A propulsive science fiction thriller set on an Earth long ago evacuated by humanity’s ‘elite’, the impressive, atmospheric second feature from Tim Fehlbaum balances hope for the future of mankind against the grim realities of a neo-colonial dystopia. Nora Arnezeder stars as astronaut Louise Blake, the sole survivor of a mission to assess whether the Earth is now habitable to the exiled human race, temporarily housed and slowly dying out on a distant planet, Kepler 209. She is met, on the inhospitable mud flat which is all that remains of the Earth’s endlessly varied and fertile terrain, by two rival communities: those who stayed on the planet and have made a life on floating shacks, and the Kepler scientists from the mission before hers. Although the film suffers from a few pacing issues from the mid section onwards, and a couple of clumsy expository flashbacks, Fehlbaum’s flair for striking mise en scene is given free reign.

The message, that humanity is unlikely to learn from its mistakes, is one which hits home

There’s a European sensibility to this story of exile: there’s a kinship (although perhaps not quite the same degree of unwavering pessimism) with Pella Kagerman and Hugo Lilja’s Aniara. However, the presence of Roland Emmerich as executive producer on this project suggests a career trajectory for Fehlbaum which may be Hollywood-headed. Saban Films holds North American and UK rights to a film which certainly merits the full big screen experience, but could hold its own as a streamed release.

Even before the Ulysses 2 mission has touched down on the surface of Earth, it’s clear that the landing pod is in trouble. The camera rattles around the interior of the capsule like shrapnel; of the three crew on board, one is killed outright, one is wounded and only Louise escapes unscathed. Her commanding officer out of commission, Louise sets out on recon alone, stomping purposefully across scaly grey expanses of mud which are shrouded in fog. She’s looking for signs of life; specifically, she is hoping for indications that reproduction is still possible here on a planet blighted by pandemics and pollution. But the soupy lack of visibility conceals the immediate dangers until it is too late.

Both Louise, and her injured colleague Tucker (Sope Dirisu), are taken prisoner and dumped in a waterlogged pit. The imminent threat of drowning is a pressing concern, but Louise is struck by the fact that there are children and babies among their captors. The Kepler atmosphere has rendered the exile community barren. Louise gazes at the children in fascination; they giggle and throw mud at her head. But the children are the targets of a marauding attack on the ramshackle floating homestead. And Louise finds herself a prisoner once again, until she is recognised as Kepler rather than a ‘Mud’ (the dismissive name coined by the survivors of the mission which came before hers). The Kepler settlement is headed up by Gibson (Iain Glen), a colleague of Louise’s father, who dreams of recolonising Earth.

The design department excels in creating a distinct environment for both communities, while also linking both with the consistency of a shared earthiness of colour palette and glowering, muddy-looking skies. The ‘Mud’ people inhabit a floating village which nods to Mad Max-style makeshift expediency, but also draws on the peasant simplicity of traditional fishing techniques. The Kepler base, housed in the hull of a wrecked ship, is harder, militaristic and fortified, order enforced on the chaos. The score, too, picks up on the differences, with an unnatural electronic motif dominating the Kepler scenes and the softer, more organic sounds paired with the ‘Mud’ homestead. And while the plotting – particularly the use of Louise’s father, who is a device more than a character – can be a little schematic, the message, that humanity is unlikely to learn from its mistakes, is one which hits home.