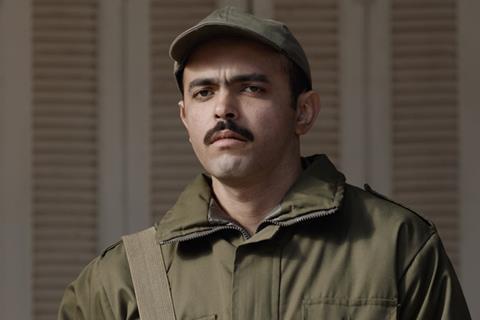 The second feature from Tunisian filmmaker Ala Eddine Slim is an enigmatic and wildly unpredictable odyssey which is too obtuse to live up to its name – Tlamess is a Tunisian word meaning ‘enchantment’.

The film starts by following the story of S (played by poet and musician Abdullah Miniawy), a soldier who is granted one week’s leave after the death of his mother. Rather than return to active duty, he absconds and soon finds himself a wanted man, pursued through an eerily deserted city. Meanwhile, F (Souhir Ben Amara), a trophy wife numbed by affluence, has just discovered that she is pregnant. The lives of the two are linked in a way that nobody could predict, and still less explain.

There is some bravura filmmaking in here, particularly in the first forty or so minutes, which meld image and score to dazzling effect. And although the film takes an unexpected swerve into a swampy mess of quasi-fantasy and loses the plot in the process, there is enough of merit to warrant sma;;-scale festival interest. The tonal inconsistencies and a scene in which a hairy man starts lactating are just two of the marketing challenges facing prospective distributors.

Rarely has a film which started so promisingly departed so dramatically from its expected trajectory. The early scenes, which show S trudging through the long days of military service are superb. The impassive lens of Amine Messadi emphasises the emptiness of life for the soldiers; the same inscrutable gaze is turned on the lifeless mess hall as on the body of a young soldier, bleeding from a self-inflicted gunshot wound to the head.

Later, when it becomes clear from S’s beard growth that he has unilaterally extended his compassionate leave and missed his week deadline to return to the army, military police storm his home and he is forced to flee. This heralds the film’s most arresting chapter. Fluid drone shots capture the sodium lighting and unearthly quiet of the city streets, accompanied by a particularly forceful passage on the always impressive score. S, who never speaks (verbally at least) is stripped bare, literally and metaphorically, by his life on the run.

In her way, F is equally alienated, albeit in a luxury home in the mountains surrounded by crisp new furniture. She is adrift in a life bought and delivered from a high end department store.

It’s when the two stories intersect that the picture spins off its access. On a walk in the woods surrounding her home, F comes face to face with S, by now a filth-encrusted troll with fingernails like guitar plectrums. She faints, and finds himself in his den, an underground bunker which is ankle deep in water. They find that they can communicate telepathically and he reassures her that he will look after her and her unborn child.

Sterling work from the production design department creates a space that looks both bone-chillingly damp and somehow inviting; a moist, mossy safe space. F’s emotional dependence on her captor is rather unlikely, but then this is a film which chucks a giant (presumably symbolic) snake into the mix as well: the chill realism of the film’s opening gives way to a water-logged revery, to disorientating and rather vexing effect.