'To The Stars': Sundance Review 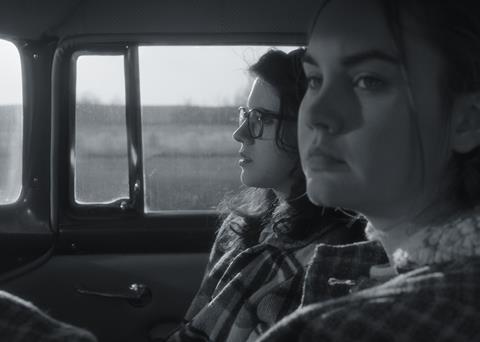 A bookish teenage wallflower and a vivacious new student forge a friendship — and perhaps more — in To The Stars, an exceedingly lovely, quietly moving drama about characters who feel like they don’t belong. Director Martha Stephens keeps her story small and precise, focusing on these two young women as their familiar rites of passage are infused with layers of melancholy and uncertainty that touchingly bring their insecurities to life. Kara Hayward and Liana Liberato are both understated but resonant in a film that’s so delicate its full impact isn’t fully absorbed until the end.

Screening as part of Sundance’s US Dramatic Competition, To The Stars will need special handling due to its slim narrative, muted tone and lack of big stars. But good reviews and warm festival reaction could translate into solid art-house and VOD viewership.

Set in the early 1960s in small-town Oklahoma, the film stars Hayward as Iris, a high-school pariah because of her mousy demeanour and weak bladder, an unfortunate medical condition that makes her the target of bullies. Into her life comes Maggie (Liberato), who has just moved with her parents (Malin Akerman, Tony Hale) after living in the big city. Unlike Iris, Maggie is edgy and confident, unafraid of the school’s mean-spirited popular girls, and the two young ladies become unlikely friends.

Stephens (co-director of Land Ho!) shot To The Stars in stark black-and-white, which makes the flat, barren landscape all the more desolate. Shannon Bradley-Colleary’s screenplay sets us up to expect that the film will be a low-key examination of outcasts, and indeed wherever Andrew Reed’s camera points, we see individuals who are unhappy with their lot, trying their best to make do. (Especially good is Jordana Spiro as Iris’s mother Francie, a sexually dissatisfied housewife who haphazardly flirts with boys her daughter’s age in the hopes of still feeling vibrant.)

The more that Iris and Maggie spend time together, the more they find something that is otherwise lacking in their lives. For Iris, the prettier Maggie encourages her to be more assertive around guys, while Maggie sees in Iris a safe space where she can be herself. (As we, and Iris, will learn, Maggie’s stories about her impressive family don’t turn out to be true.)

To The Stars is so gentle and straightforward that it risks being slight, and indeed some of the twists can be predictable. For instance, a misunderstanding between the two women leads to harsh consequences in this conservative town, resulting in a dire outcome that is unsurprising and perhaps inevitable. But Stephens is less interested in plot points than in chronicling Iris and Maggie’s anxious mind set, and so To The Stars’ gentleness serves as an empathetic, protective shield over these characters, who feel alienated both at school and home. (Many of the boys in their class are unevolved cretins, while their parents fear they’re not sufficiently “normal.”) Again and again, Iris and Maggie return to their private watering hole, an inviting sanctuary that itself is fraught with sadness — it’s the location where a classmate’s mother took her own life.

There’s a metaphor in that reveal. To The Stars populates its tale with discontented women who don’t see any means of escape for themselves, and the two leads’ performances communicate their characters’ slow realisation of what might be their fate. Hayward doesn’t overplay Iris’ nerdy personality, keeping her a realistic portrait of an awkward teen, while Liberato conveys Maggie’s outsized personality while hinting at the secret shames buried underneath.

Despite being seemingly very different people, Iris and Maggie connect because of a shared genuineness — an ability to be vulnerable and let others in — and Stephens’ observant film illustrates what can be beautiful and also wrenching about such courage. A simple story celebrating the importance of showing resilience and goodness in the face of intolerance, To The Stars never shouts to make its points. All the better that it forces you to lean in so you can really hear.