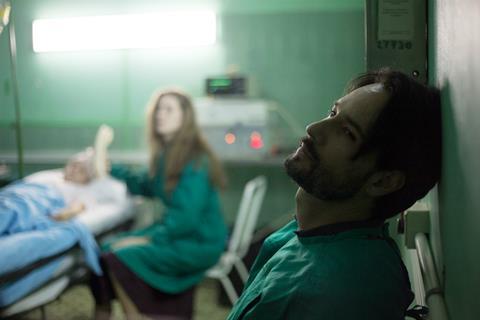 Taking a personal and poignant approach to real-life events, Un Traductor translates the treatment of Chernobyl victims in Cuba into a tenderly told drama; one that wears its heart on its sleeves, and rarely veers from the expected, but resonates with genuine emotion. The latter should be a given, as the first feature from director siblings Rodrigo and Sebastián Barriuso is also a chapter from their parents’ lives.

Premiering in Sundance’s World Cinema Dramatic competition, the modest star power of 300, Love Actually and Westworld’s Rodrigo Santoro in the lead should help it earn modest attention. It’s the based-on-a-true-story nature of the film that might help it broaden its fortunes beyond Utah, however, with further festival play more likely than a general release. Still, Un Traductor should entice arthouse crowds — while marital stresses, ailing children and the after-effects of the collapse of the Soviet Union aren’t uncommon film fodder, the narrative’s little-known, specific historical context will garner interest.

Previously known as ‘1989’ in reference to the year it’s set, and receiving prizes and assistance from the Guadalajara Film Festival and Sundance’s Editing Intensive, the feature commences with Mikhail Gorbachev’s first trip to Latin America. In archival footage, Fidel Castro awaits, while in cinematographer Miguel Littin-Menz’s images, so do Santoro’s Malin and his excited young son Javi (Jorge Carlos Perez Herrera) among the amassed crowds.

A professor of Russian literature, Malin is considerably less enthused when he later finds his faculty closed until further notice, as well as instructions directing him to report to a specific address. When he discovers he’ll be working nights acting as a translator between Havana doctors and their radiation-struck juvenile patients, he is initially unhappy with his new job. Then he gets to know his charges, reading them stories, offering a friendly face as their condition inevitably deteriorates and hearing their heartbreaking accounts of their horrific ordeal.

While his Argentinian nurse colleague Gladys (Maricel Álvarez) can understand the emotional toll that Malin is under, at home a predictable situation ensues. His art curator wife Isona (Yoandra Suárez) becomes increasingly frustrated by his absence — as well as his distant demeanour when he is present, especially after she falls pregnant again. And with Cuba suffering economically after the Soviet dissolution, patience, like money, food and gasoline, is in short supply.

With fellow first-timer and producer Lindsay Gossling writing the script, Un Traductor steps through several layers of struggles, finding similarities in intimate relationships and connections between nations, as well as one man’s need to help and a society’s duty to do the same.

At the heart of it all sits Santoro, given a substantial showcase and bringing quiet grace to his part as a result. If the story rarely surprises, its central player never endures the same fate, imbuing every gentle gesture and anguished, rattled look alike with the requisite feeling. Suárez and Álvarez also make an impact, giving weight to their thinner roles — with Suárez investing Isona with a firm resolve, and Álvarez offering a reminder of why she struck a chord in Alejandro G. Iñárritu’s Biutiful. As the most prominent of the young patients, Nikita Semenov threatens to steal his few but memorable scenes.

Period detail draws the audience in, this is a film which looks simultaneously crisp yet lived-in thanks to its ‘80s, institutional, grey, cream and green-heavy colour scheme, and crumbling yet vibrant when it roams around Havana’s streets and beaches. A visual penchant for faces and detail, both frequently filling the frame, does the same. Indeed, the Barriusos make the personal feel just that — sometimes, in the storytelling, in a well-worn fashion, but movingly enough all the same.