'Under The Sun': Review 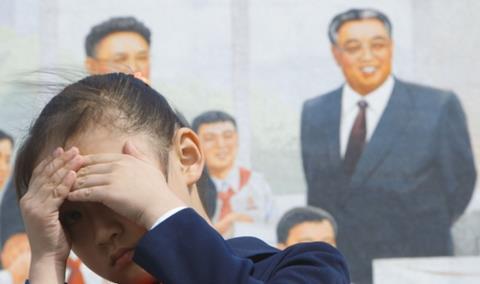 Out of shot, a voice barks “Go”. Eight-year-old North Korean schoolgirl Zin-Mi turns to camera with a beatific smile. “My father says that Korea is the most beautiful country… Korea is the land of the rising sun.” Message delivered, her smile wavers just a little as the camera continues to record.

This film is a high-quality package about a newsworthy but little-seen subject: a life beyond the festival circuit seems certain

The script of this extraordinary and revealing film, about an ordinary family in Pyongyang, was assigned to the filmmakers by the North Korean authorities. The crew was accompanied at all times by minders ‘to prevent us from getting lost’; the locations were pre-selected; the performances orchestrated to depict suitably fervent levels of patriotism. All the footage was scrutinised by DPRK officials to check for mistakes in showing a typical family in ‘the best country in the world’. It’s no wonder that the smiles start look a little forced. What’s more unexpected is just how much Russian documentary filmmaker Vitaly Mansky is able to reveal despite, and often because of, the stringent restrictions imposed upon him.

This film is a high-quality package about a newsworthy but little-seen subject: a life beyond the festival circuit seems certain. Under The Sun comes to Tallinn Black Nights Film Festival having already won Best Film at the Jihlava International Documentary Festival in the Czech Republic. Critical support should help to generate theatrical interest, and television sales are likely.

Mansky has past experience in documenting countries ruled by hidebound communist regimes. His 2011 film, Motherland Or Death, is a study of day to day life in Cuba. Even so, the level of control imposed by the DPRK government must have come as a shock. But Mansky turns it into a gift. By leaving the camera running almost continuously, during the meticulous set up of each shot, during take after take in which the message is fine-tuned, during the hectoring direction from the minders (“Again! Loudly and more joyfully!”), Mansky peels back the rhetoric to reveal the framework on which indoctrination is constructed.

The forewoman at the garment factory is required to make a rousing speech announcing that they have exceeded their government quota, praising the engineer for his work. Mansky includes each of the many rehearsals, and the anxious twist of the woman’s hands between takes as the minder berates her team for their lack of convincing zeal. By the final take, the excess production has gone from 150 percent above the quota to a full 200 percent.

Zin-Mi, the central character in the film, attends one of the best schools in the capital. The centrepiece of the state-sanctioned script is her joining of the Korean Children’s Union on the ‘Day Of The Shining Star’ (the birthday of Kim Jong-Il). It’s an extraordinary, vivid piece of pageantry. Veterans dripping gold medals like Christmas decorations look on benignly before shuffling down to tie the ceremonial scarf around the necks of the next generation of loyal workers. It’s a stark contrast to the (admittedly few) glimpses we catch of the unstaged city. Commuters glance warily towards camera in obvious discomfort; a woman adjusts a thick thermal layer worn under her smart uniform to guard against the biting cold in the ‘exemplary’ workshop. And Zin-Mi silently weeps on camera when the weight of the propaganda machine gets too much for her.