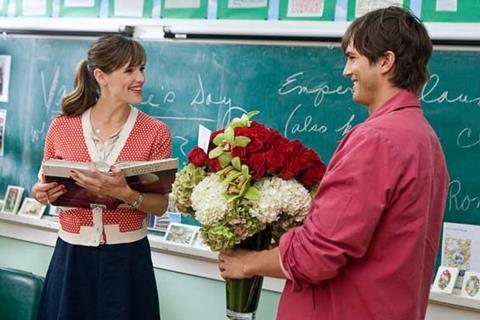 A couple of touching moments aside, Valentine’s Day is as blatantly engineered and resolutely frothy as mid-February date movies get. But that could be just what the target audience is looking for when this New Line romcom with a starry, multi-generational ensemble cast arrives in cinemas – in the US as well as many international markets – on the eve of Valentine’s Day itself.

Worldwide distributor Warner Bros, which this time last year did well with New Line’s ensemble romance He’s Just Not That Into You (its worldwide gross of $178m was split $94 domestic to $84 international), should clean up over the film’s opening holiday weekend in the US. Elsewhere, the cast and Warner’s muscle (He’s Just Not… went through independents internationally) will probably outweigh most audience resistance to the fluffy tone.

Unfolding over the course of one particular Valentine’s Day in Los Angeles, the film, directed by Garry Marshall and with a story by He’s Just Not… writers Abby Kohn and Marc Silverstein, follows more than a dozen characters, some already in love, some falling into or out of it.

Comic overacting is rampant, but there are a couple of quieter performances - most notably from Julia Roberts and The Hangover’s Bradley Cooper – and a few more serious scenes.

Mostly, though, Marshall keeps the tone feather light and the pace brisk, delivering a film that feels like a handful of inter-cut TV sitcoms.