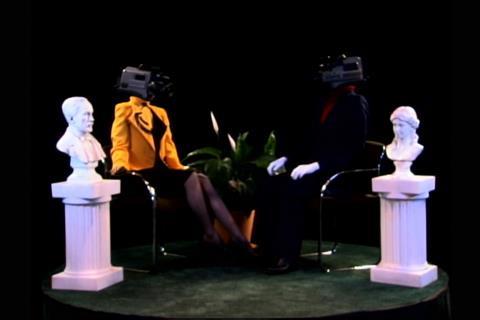 Deliberately scattershot and naïve, this engaging, absurdist collage, shot entirely on VHS tape, smuggles a serious message beneath its 80s poodle-permed public access television pastiche. It’s Christmas, 1987, and 12-year-old Ralph has unwrapped a state of the art video camera. He grabs the nearest tape (his parents’ wedding video) and starts recording. His subjects – forbidden late night television, his best friend, his parents’ fracturing marriage – are disparate. But gradually, the seemingly random elements thread together and something loosely approximating a plot appears. An unexpected left turn in the final act, from wry comic nostalgia into genre, is less successful than the endearingly clunky recreations of workout videos, advertising, shopping channels and oddball amateur TV oddities.

The first feature from Jack Henry Robbins evolved out of two short films, Painting With Joan and Hot Winter: A Film By Dick Pierre, which premiered at Sundance in 2017 and 2018 consecutively. It is tailor-made for festival audiences: the combination of its affectionate use of lo-fi VHS filmmaking technology (presumably the first brush with homemade cinema for many audience members) and its nod towards today’s culture of obsessive self-documentation will make for an appealing program addition for festivals after the film has its international premiere in Rotterdam. Too quirky and slight to generate much momentum theatrically, the presence in the cast of comedienne Charlyne Yi, Mark Proksch (The Office, What We Do In The Shadows) and Robbins’ parents Susan Sarandon and Tim Robbins might provide a marketing angle.

The erasure of the wedding video, choppily obscured by the kind of cultural ephemera that a pre-teen boy might find attractive, has a certain poignancy. Through the glimpses of footage that Ralph captures of his parents, it becomes clear that the marriage is struggling. We hear muffled late-night recriminations as Ralph hides the camera under the bed covers, trying to conceal the fact he has been taping softcore porn from the television. This is the most significant of the story strands which gradually cohere over the course of the picture, as the amusing but initially disposable sketch format gathers momentum and a series of mini-threads emerge.

A toxic relationship between two formerly married shopping channel presenters deteriorates live on air; the gauche host of a front room music show, ’Interludes with Lou’, has a real-time lesbian awakening; the banal public access show ’Painting With Joan’ reveals an unimaginable darkness in the soul of Joan (Kerri Kenny, great fun), the chintzy middle-aged lady who keeps “lucky bones and hair” in her bedside cabinet, “to keep the night terrors away”.

The chipper found-footage structure and skittering editing which reflect the attention span of a 12-year-old boy means that the picture never drags, but neither does it achieve much in the way of depth. Perhaps the most interesting element is the suggestion that VHS was the starting point for a cultural shift. Ralph records a brief clip of a televised interview with an author who has researched the impact of home video use and discovered “tape narcissism”, a pathology of the home video user which will eventually alter their relationship with reality. “It’s the beginning of something very frightening. The world will exist to be filmed.” But then Ralph loses interest and tapes a global warming themed porn movie instead.