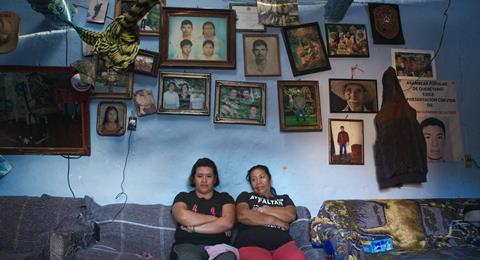 On the evening of September 26, 2014, students from a rural teacher training college travelling in a convoy of buses in the city of Iguala, Mexico were attacked by police and other unidentified assailants. Six were killed, many were injured. And 43 of those students were ‘forcibly disappeared’. Their fates remain unknown. This affecting film, directed by artist and human rights advocate Ai Weiwei and developed in parallel with an exhibition for Mexico City’s Museo Universitario Arte Contemporaneo, is not a journalistic attempt to disinter the truth. There is an acknowledgement of systemic power abuses, but no forensic examination, no facts to cling to. Instead, Ai Weiwei explores the malignant impact on the lives of families and communities forced to coexist with hope, despair and the knowledge that they may never know what happened to their sons.

It exists in a kind of purgatory of suspended grief.

Without the thrusting force of an investigation, it’s an approach which means that the documentary, like its subjects, seems initially compelled to cycle through the same themes repeatedly. It exists in a kind of purgatory of suspended grief. But as the film unfolds – it was shot over the course of a year from March 2018 until March 2019 – the families start to unite with others in the same situation to lobby those in power and insist on a fair investigation. Perhaps not as ambitious or as thematically far-reaching as The Human Flow or its sister picture The Rest, both of which dealt with the plight of migrants on a global basis, Vivos is nevertheless a powerful and perceptive study of lives invaded by tragedy. Further festival berths are a given and Ai Weiwei’s status as one of the more influential artists of the past decade should command audience interest, whether the picture is distributed theatrically or through a streaming service.

Although there are five credited cinematographers for the project, there is a consistency in style of much of the carefully framed photography. The first part of the film is almost entirely composed of static locked shots, either portraits of the family members or still life glimpses of their homes. It’s an effective device, this lack of movement. We get the sense of lives arrested, of whole communities mired in grief and unable to move forward.

It’s only when some of the families start to channel their anger into action – marches, co-ordinated protests at government buildings, a movement which galvanises the families of some of the other estimated 40,000 Mexicans who have been forcibly disappeared – that Ai Weiwei permits a more dynamic camera approach. The film takes its title from the chant of the protestors: “Vivos se los llevaron, vivos los queremos” (Alive, they took them. Alive, we want them back.)

The observational component – the texture and rhythm of family life in the shadow of trauma – is clearly the element which most interests the director. Interviews with experts – investigative journalists, human rights lawyers – provide crucial context and background information, but do feel rather cursory at times and are choppily edited into the film, disrupting its meditative flow.

They are an acknowledgement, however, that the key question that the film sets itself – how do people heal after such a devastating open-ended tragedy? - is perhaps secondary to the question which preoccupies the subjects of the film: that of what exactly happened to their children. The mystery, it becomes clear, involves complicity and misinformation from the bottom to the very top of Mexico’s government and authorities.