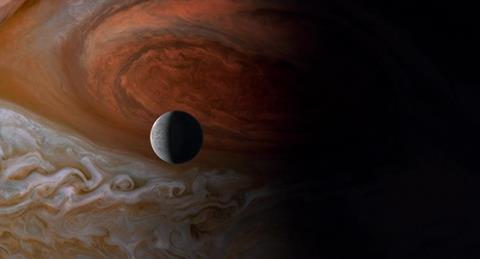 It could be argued that this is the film Terrence Malick has been feeling his way towards ever since The Thin Red Line. The Texan auteur has seemed increasingly less interested in human drama in recent films, from The Tree Of Life to Knight Of Cups, and in this ravishing but frustratingly hermetic birth-and-death-of-the-universe documentary, he dispenses with it almost entirely.

There are moments when miracles do take place on screen

The film has been made in two versions: the 90-minute 35mm print reviewed here, with narration by Cate Blanchett, which premiered in competition at Venice; and a 45-minute IMAX version, with Brad Pitt providing the voice-over, which is due to be released in North American IMAX theatres on 7 October. This version resists the educational, ‘Disneynature’ touch of films like Ocean, Winged Migration or the BBC’s Planet Earth franchise: resolutely framed for the arthouse, Voyage of Time is an impressionistic, poetic cosmic journey that asks far more questions than it answers, many of them in Malick’s by now familiar quasi-religious rhetorical style.

And yet for those alienated by the New Age spiritualism that is voiced with measure and grace by Blanchett, Voyage of Time is, for parts of its running time, a joy to watch and listen to. It is, in essence, the celebrated ‘cosmic’ sequence from the Tree of Life expanded into a full-length feature, and many of the audio-visual tableaux it weaves are astonishing, mesmerising, delightful. The problem is that they are not also informative: a view of Voyage would be no help at all even in a primary-school cosmology and life-on-earth exam.

The film’s painterly tableaux follow a roughly chronological order, beginning with the primordial darkness of the opening seconds, when we hear Blanchett addressing the never-identified “mother” figure to whom most of the narration’s many questions will be put – questions like “Am I not your child?”.

The imagined birth of the universe with the Big Bang, the cosmic dance of matter and anti-matter, star and planet formation, the earth’s molten, volcanic infancy, the birth of the first life forms, increasingly complex marine organisms, amphibians, swamp forests and dinosaurs, birds (though very few) and mammals, and the rise of hominids from their hunting and gathering origins through to the appearance of today’s technological, resource-guzzling cities – Malick’s impressionistic collage runs through all these bases, respecting the man-belittling cosmic timescale to some extent. A short epilogue takes the story forward into post-human time, returning to the swirling galaxies and nebulas of the opening scenes.

Malick being Malick, a strand of interference is dropped into the mix, consisting of grainy, colour-leaching Academy-ratio home-video footage, much of it apparently shot on a Japanese retro ‘Digital Harinezumi’ camera (think moving Polaroids), of today’s troubled, chaotic, colourful world. In inserts that last no more than a couple of minutes at most, we see homeless people, refugee camps, Hindu festivals and Cairo demonstrations, an elderly pigherd, a Jewish marriage ceremony. It’s debatable how much these brief and often rather random-feeling sections add to the edifice, but they do, taken together, serve the director’s asssumed purpose – of suggesting that our petty human problems don’t add up to much.

Scored by recent Malick music aide Hanan Townshend as well as Arvo Part, Keith Jarrett, Bach, Poulenc and other composers, Voyage was filmed, the final credits reveal, in locations as diverse as Iceland, Chile, Kenya and Palau. But many of its effects were created in a special effects lab called Skunkworks that Malick set up with experienced visual effects supervisor Dan Glass (Batman Begins, V for Vendetta) where, under the supervision of a scientific committee headed up by Harvard natural history professor Andrew Knoll, cosmic imagery was created using such props as marmalade suspended in glycerine, milk and paint on tabletops, and drops of dye in water baths.

Imagery has also been borrowed from sources as diverse as the Hubble Space Telescope, NASA space probes and Italian ‘fractal geometry’ documentarian Sandro Bocci. There are times when the mix jars tonally, especially when genuine, extraordinary living creatures have their miraculous beauty undermined by the fakery of their CGI-generated brethren – one of the worst offenders in thus respect being a cute Pixar-esque baby dinosaur that we also glimpsed in Tree of Life.

But there are moments, nevertheless, when miracles do take place on screen:  a swirl of galaxies; a plug of underwater lava advancing and hissing like a sea-snake; a school of small fish, under attack by swordfish, swirling in a protective vortex like a cloud of starlings. Surrender to Malick’s cinematic fresco, and you may be charmed.