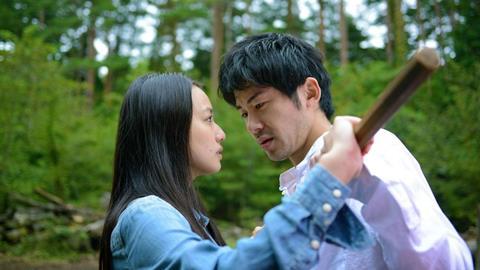 This eccentric, hugely enjoyable film is often a fairly arousing one, with female pleasure and male discomfiture foremost on the menu

Director Shiota is known for psychological dramas including Harmful Insect (2001) and blockbusters such as 2007 action film Dororo, but this pared-down and somewhat conceptual project allows him to vent his whimsical side with crowd-pleasing, and sometimes authentically raunchy results. The film has already sold to South Korea and Taiwan, and Western niche distributors and festivals alike could well warm to it as a cultish pleasure with a distinctive female power angle.

The heroine is Shiori (Yuri Mamiya), a young woman of unstoppable libido and physical energy to match, who won’t take no for an answer. The setting is a rural backwater, where playwright Kosuke (an engagingly befuddled Tasuku Nagaoka) is camping out in a precarious lean-to shack, intending to get away from it all. One day, he encounters Shiori as she makes an explosive entrance – riding her bike straight into the river, then emerging to strip off in no-nonsense fashion.

Shiori instantly latches on to Kosuke, and insists on getting a piggy-back from the reluctant loner: the first of many increasingly frenetic tussles they end up sharing. Henceforth, Kosuke can’t expect much peace and quiet; first he comes to blows with a manic café owner who’s got the hots for Shiori, and also blames Kosuke for wrecking his marriage; then he gets a visit from his ex, a theatre director who turns up accompanied by a comical quartet of earnest young men who put on an impromptu theatre show, which Shiori, naturally, contrives to turn on its head.

Kosuke’s ex still has the hots for him, but the narrative turning point comes when Shiori muscles on the action, with Kosuke getting nothing but a kick for his pains. The sexual whirlwind that Shiori whips up from this point on includes a brisk routine when she gets the four actors to line up outside a camper van to pleasure her, and a frenetic sex sequence in which the shack collapses, only for unflappable Shiori to cut a slit in the canvas roof and carry on regardless.

The sheer energy of the performers, especially an exuberantly funny Mamiya, and the slapstick goofiness of the whole make this an eccentric, hugely enjoyable film - and often, partly because of its relative demureness, a fairly arousing one, with female pleasure and male discomfiture foremost on the menu. Shunsuke Kida’s playfully jazzy score gives this eccentric piece additional hipster appeal.