In Brasilia, an activist struggles against a political tide to give voice to the homeless 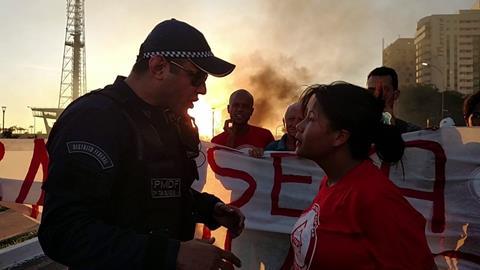 Edson Francisco da Silva has been at the heart of the Homeless Workers Occupation movement in Brasilia. Where’s Edson? quietly reflects on the personal cost of his activism. It also blossoms into a wide-ranging portrait of the struggle to achieve a basic human right in a country that seems intent on denying it. A dense report from the front lines, Where’s Edson? would seem a natural fit for politically engaged festivals drawn to films that give a voice to the voiceless.

Ibiapina tries to convey some of the complex currents and conflicts in Brazilian politics and there are times when this could all serve as the basis for a vintage Costa-Gavras thriller.

The documentary begins in spectacular fashion with an assault on the Torre Palace hotel. Helicopters circle the building, bullets are fired, tear gas explodes and troops land to take control of the situation. It is not the end of a terrorist siege or the last moments of a hostage crisis. Those led away are just a small group who have spent the past eight months making their home in an abandoned building.

Edson is one of those arrested. The charges against him include attempted murder and forming a criminal organisation. Dacia Ibiapina’s documentary is very much a challenge to that ‘official’ narrative, offering her own picture of Edson and others in a movement where homeless people occupy buildings that have no social purpose.

Covering the period from 2012 onwards, Ibiapina uses footage from a succession of occupations to reveal the basics of the movement. Often in the dark of night, people arrive with duvets, blankets and all their possessions crammed into carrier bags. Their intention is to claim a space and make their homes. Before long a camp is established. Children play in the dirt, songs are sung around campfires and a sense of solidarity is forged. This is a response to a country where the working poor cannot afford rents. Sometimes a year may pass but inevitably they are forced to move on.

The portrait of Edson is assembled through talking head testimony from those who know him well. There is admiration for his commitment and radicalisation. A stoical Edson recalls death threats and an attack on his home as if they are just everyday occupational hazards. He has spent time in jail, a spell in hiding and proudly proclaims himself “radical in my politics”. Political differences eventually lead him to break from the MTST (Movimento dos Trabalhadores Rurais Sem Terra) and form a different group.

Ibiapina sacrifices some of the film’s sharp focus to widen the scope and include the stories of other individuals who have been part of the movement. There are also references to the impeachment of former President Dilma Rousseff, the impact of the Olympic Games in 2016 and the rise of Jair Bolsonaro.

Ibiapina tries to convey some of the complex currents and conflicts in Brazilian politics and there are times when this could all serve as the basis for a vintage Costa-Gavras thriller. It is the story of Edson that lends the film its human focus. He cuts a forlorn figure as Bolsonaro is inaugurated as President. Alone in a field as crowds suges past, he seems unlikely to achieve a victory against social injustice any time soon. His stoical determination to continue provides a grace note of hope.