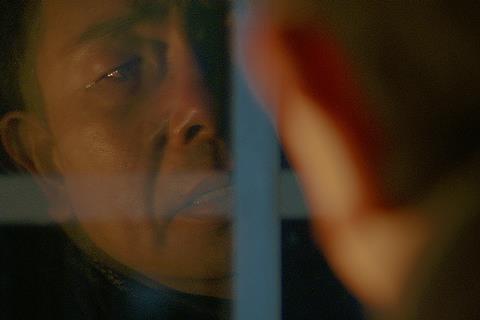 A middle-aged couple return to Chuncheon’s Cheongpyeong Temple after thirty years. The out-of-season tourist site, a popular destination for day trippers from Seoul, was the place where their early relationship blossomed from friendship into something more. But now they find themselves stranded on the thin ice of a fracturing marriage. Meanwhile, a younger couple, who may or may not be earlier versions of the husband and wife, wander around deserted temple site, delighting in the discovery of each other. Jang Woo-Jin’s third feature is a delicate, crystalline study of the fragile connections between two people.

Winter’s Night is Jang Woo-Jin’s third feature. His first, A Fresh Start, won the grand prize at 2014’s Jeonju, but this has thematic similarities with his last, Autumn, Autumn, which also featured a middle-aged couple musing on the tourist attractions of Chuncheon.  A passing resemblance to the formally playful intimacy of Hong Sang-Soo certainly won’t hurt the film’s chances of connecting with further festival audiences, but what’s most distinctive here is a beguiling hint of enchantment and mystery which charges seemingly prosaic encounters with a suggestion of hidden meanings.

An ambitiously complex opening scene in a taxi leaving the temple tells us much about the dynamics between husband Heung-ju (Yang Heungju) and wife Eun-ju (Seo Younghwa). He leads the conversation with the driver; she, literally, takes the back seat. But when Eun-ju realises that she has left her phone behind, she is disproportionately distressed. Later, revealingly, she explains that “it’s all I have” - the one thing that is inarguably hers in a life over which her husband has stamped his own identity, in a kind of psychological man-spreading.

Grudgingly, Heung-ju humours her agitation, and they retrace their footsteps, in the process missing the final boat to the mainland. The story unfolds against backdrops – icy grottos and the temple itself – which are drenched in unnatural colours: rose pinks and blues for the fringes of icicles; a rich, velvety red for in the temple.

The ache of melancholy which seeps through the story is sharpened, unexpectedly, by humour, much of it drawn from Seo Younghwa’s enjoyably angular and unpredictable performance. “Are you bored of me?” asks her husband. He’s taken aback by her derisive, blurted laugh. “Honestly? You’re not fun,” she answers. She has a point. As the night wears on, Heung-ju marinates in soju and self-pity, bellowing out a ballad in a deserted karaoke bar before a chance encounter with a former lover knocks him off balance. But is she really there? She seems present enough, and handsy Heung-ju wastes no time lurching after her for an opportunist grope. But it’s just as possible that, nostalgic and high on pickled memories of previous visits to the island, Heung-ju conjured her out of the snowy night.

Likewise the young couple, on whose courtship we eavesdrop and who rescue Eun-ju when she finds herself in danger of falling through the ice. The parallels between the two pairs of lovers, young and old, are such that when Eun-ju hugs the younger woman in a moment of solidarity and reassurance, it’s clear that, one way or another, she is talking to herself.