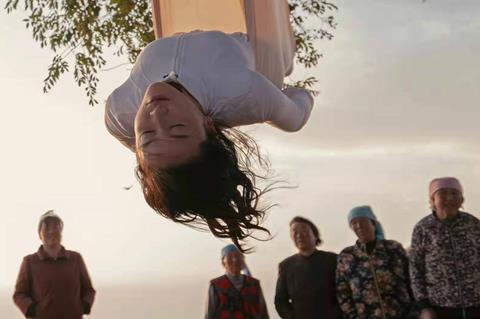 Money is the root of all evil – a premise that continues to hold good for moral-meltdown dramas from Manhattan to Mongolia. The inexorable slide towards catastrophe faced by the anti-hero of Zhou Ziyang’s Wuhai may have its particular Chinese inflections, but is not that different in kind from the abyss blindly plunged into by the protagonists of films such as Uncut Gems, with viewers watching through their fingers as misguided characters make one reckless error after another. Unfortunately, Zhou never quite attains the tragic dimension he’s aiming for, leaving viewers likely to cringe in disbelief at Wuhai’s catalogue of catastrophe.

We emerge from Wuhai shaken but not altogether enlightened

The vivid eccentricity of the film’s visuals, however, and the clear-eyed cynicism of its view of gutter-level economics in contemporary China, make for a certain raw urgency that should give Wuhai some visibility at fests and niche platforms.

Money crises were the motivating factor in Zhou’s 2017 debut Old Beast, under the production aegis of star director Wang Xiaoshuai, and that’s true again in this depiction of an inextricable web of debt and desperation in the Inner Mongolia city of the title. Yang Hua (Huang Xuan) is a failing speculator married to Miao Wei (Yang Zishan), who runs her own yoga studio and whose parents - including her father played by Tu Men, returning from Old Beast – have paid for the couple’s well-appointed apartment.

Yang’s planned dinosaur theme park has been aborted, with his money used to bail out high-rolling friend Luo Yu (Wang Shaohua). Luo Yu’s own fancy project, a yurt resort in the middle of the nearby desert, is about to be launched, and he seems in no hurry to repay Yang the money he owes – and which Yang desperately needs, with creditors battering down his door. Meanwhile, debt collecting seems to be the backbone of Wuhai’s economy, at least this film’s corner of it. Yang Hua is himself chasing debts for Luo Yu’s sidekick Cheng, and reluctantly leaning on a young woman who is desperate enough to sleep her way out of trouble if necessary.

Meanwhile, Miao Wei is pregnant and hasn’t told her husband – not least because the father may be an old flame she has been seeing. As the couple’s desperation mounts, things explode in the film’s most dramatically charged scene - a long-take domestic row, complete with smashed furniture, that attains a Cassavetes-like intensity. This is the most purely naturalistic moment in a film that otherwise opts for an imagistically heightened tone – for example, when a surprise aerial shot shows the results of Yang running riot at the yurt park, or images of the abandoned dinosaurs standing guard over the desert (Yang even crawls into one saurian’s gaping maw for shelter).

Cellphones, constantly ringing as characters’ nerves fray, provide a consistent soundtrack and some of the oddest imagery, including the opening sequence of people digging up earth to get to the squirming lungfish beneath.

The imagery can be overbearing – the dinosaurs both embodying, apparently, the feral nature of capitalism and the futility of building empires on sand. And, as things get ever worse for the hapless couple – seen in iPhone footage in happier days, plighting their troth under a mountaintop statue of Genghis Khan – we are taken into a realm of calamity where everything feels so heavily loaded against the pair, both with lamentably short fuses, that it’s hard to have much sympathy or hope for either of them.

We emerge from Wuhai shaken but not altogether psychologically or dramatically enlightened, and grateful for odd glimmers of leavening humour – like the desert orchestra that keeps fiddling while yurts burn, or the eye that pops out of a dinosaur’s socket. The DV photography by Matthias Delvaux (who also shot Old Beast and Zheng Lu Xinyuan’s Rotterdam winner The Cloud in Her Room) gives a vividly textured charge to the desert, mountain and urban locales alike, and leads Huang Xuan and Yang Zishan bring out the hard-pressed desperation and (in that central scene) emotional fury with a vividness that the drama itself doesn’t always earn.