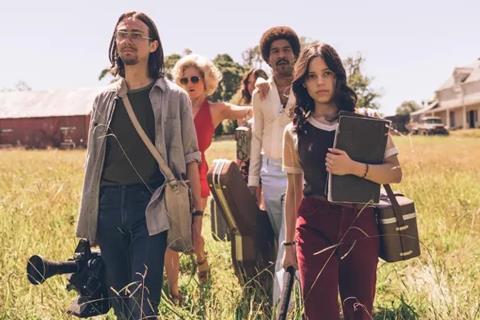 It has been six years since Ti West’s last film, the western In A Valley Of Violence, and even longer since his last full-on horror, 2013’s The Sacrament. So it is a thrill to discover that the intervening years have not seen him lose any of his bite; indeed, his period slasher X, about a bunch of bright and beautiful young things making an adult movie in rural Texas when they’re caught by their reclusive hosts, is a full-tilt genre experience that is as surprising as it is savage.

X, a co-production between A24 and Bron Studios, was filmed in secret in New Zealand during the pandemic and, while in mandatory quarantine before shooting began, West decided to write its forthcoming prequel, Pearl, also for A24, in collaboration with star Mia Goth over FaceTime. The 1979-set X will be a no-brainer for fans of West, whose previous films also include The Innkeepers and fellow ’70s chiller The House Of The Devil, when it opens in the US, UK and multiple territories on March 18, following its premiere in SXSW Midnight. Word of mouth could see it break through to a wider late night crowd, but it will likely find its largest audience on a streaming platform.

Maxine (Mia Goth) an aspiring movie star, is starring in older boyfriend Wayne’s (Martin Henderson) home-made porn flick. The couple pile into Wayne’s van with bombshell Bobby-Lynne (a sassy Brittany Snow), smooth-talking ex-military man Jackson (Scott Mescudi, aka Kid Cudi), cameraman RJ (Owen Campbell) and RJ’s strait-laced girlfriend and assistant Lorraine (Jenna Ortega). Together, they head out to the isolated Texas home of the very elderly Howard (Stephen Ure, under heavy make-up) and his equally-as-ancient wife Pearl (also played by Goth, donning extreme prosthetics, in a dual role that goes beyond gimmick to strike at the heart of the film’s themes). It is Wayne’s plan that they film their adult movie, titled ‘Farmer’s Daughter’, in the guesthouse and barn where they are staying, in secret, so as not to incur the wrath of their conservative, gun-toting hosts.

Echoes of The Texas Chainsaw Massacre are present — deliberately and beautifully rendered — from the opening sequence. The scratchy VHS quality of the image, the secluded rural homestead, the buckets of blood that signal an unspeakable atrocity which has left the local police chief scratching his head and retching into a handkerchief. From here, West flashes back 24 hours, to the seedy ‘Bayou Burlesque’ strip club, adrift in an industrial Houston wasteland, where Maxine is getting ready to go on stage. “You’re a fucking sex symbol,” she tells herself in the mirror.

Throughout, West nails the seventies aesthetic; not just in obvious ways of clothes, tunes (‘In The Summertime’, ‘Don’t Fear The Reaper’) and Maxine’s glittering swipe of disco-blue eyeshadow, but also in the grainy texture of his image, the unhurried pace. As the film progresses, this gives way to some intense camera work, deft edits and slick physical effects, but the real fear comes from the slow-burn tension created by this unconventional set-up.