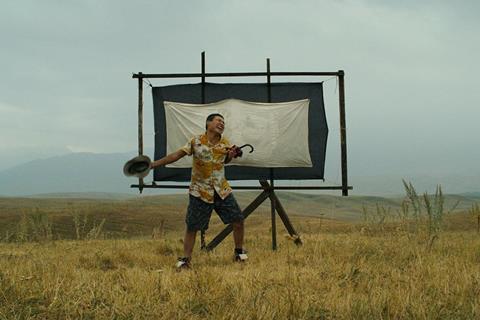 Bubbling under in this whimsical Kazakh Bonnie And Clyde romance is a critique of a corrupt system that sees local law enforcement and crime-syndicate power brokers working together to crush the little guys. And at its best, Yellow Cat’s dreaminess and escapism, distilled in the film’s awkward hero and its vibrant colour palette, are a rebuke to the grinding greyness of life in a repressive, patriarchal society. But by around the midpoint, quirkiness for its own sake has smothered the needs of story and character one too many times. From there on in, Yellow Cat sinks under the weight of its own cuteness.

A story of a socially awkward fugitive and the scatty hooker he teams up with, Yellow Cat comes on at times like Badlands remade by Roy Andersson in the vast steppes of Central Asia. Director Adilkhan Yerzhanov courts such comparisons in a film that is stuffed with references to classic films, particularly Jean-Pierre Melville’s 1967 neo-noir Le Samourai. Like a cineaste secret handshake, these nods at the Western arthouse canon make Yellow Cat a festival film at a difficult time for festivals. After its Venice Orizzonti debut, it played in San Sebastian and now Busan, but may struggle to make the leap into other more commercial berths outside of its French co-production territory.

There’s no sign of a city in Yellow Cat, or a town for that matter. Houses and even shops are isolated accidents in a desolate landscape criss-crossed by power lines, which seem to act as a reminder that life is elsewhere. Into this Kazakh Western setting steps Kermek (Azimat Nigmanov), an inarticulate, gauche, none-too-bright ex-con who is obsessed with Le Samourai, though it will soon turn out that he’s never even seen the film to the end. His dream is to open a cinema in the steppes, on a remote property that belonged to a deceased uncle.

Divided into seven chapters with names like “In which Kermek meets Eva”, Yellow Cat takes its sappy hero on a road trip as he is first forced to join the gang of bent local copper Bozoy. But when he gets on the wrong side of the mob in which Bozoy (Yerzhan Zhamankulov) is just a pawn, he’s obliged to go on the run. By this time he has met up with henna-haired Eva (Kamila Nugmanova), a waif who is forced to service men in a country brothel and seems to have become unhinged by a life of abuse. When we first see her, she’s turning to face a house on the horizon in a shot that duplicates Andrew Wyeth’s celebrated painting Christina’s World. Like a later shot in which we see the cover of Henry David Thoreau’s 19th century nature-worship book Walden, this reference seems gratuitous, simply thrown there for us to do what we will with it.

Primary colours stand out against the relentlessly sere and often beautiful savannah landscape: the yellow car in which Kermek and Eva make their escape, Eva’s blue dress, a green T-shirt, a red balloon. Kermek has a fragile charm: he has something of a melancholy silent-comedy face, and when he overcomes his monosyllabic awkwardness, as he does with Eva, he’s capable of poetry. “You’re like a tree for me, and I’m the rain”, he tells her, in a love scene that is also about two damaged adults whose family traumas are only lightly sketched in, rediscovering the child within.

But as Yellow Cat strings one carefully composed odd-people-in-a-landscape shot after another and veers towards its magical-realist finale, it’s difficult to stay emotionally engaged in a film that forgets to give its plot twists any logic and its characters any life independent of the kooky fairytale they’re acting in.