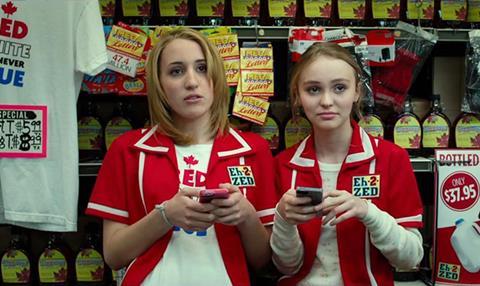 Twenty-two years after Kevin Smith’s lo-fi New Jersey debut Clerks premiered at Sundance, the former video store clerk is back with a teen-girl adventure, comedy-horror flick and loony head-trip, all in one. Probably best watched on some mind-altering substance, the film combines high-school humor, lots of Canadian jokes, and a phalanx of murderous, miniature “Bratzis,” Nazi bad-guys made out of bratwurst.

This gag-filled romp is unabashedly and proudly ludicrous

While Yoga Hosers could be a potential cult item for the dazed-and-confused set, it’s such a weird and woolly affair that it’s more likely destined for Smith’s most ardent fans—of which he has a lot (some 2.7 million followers on Twitter). Marketers will need to make much of Johnny Depp’s appearance as a bushy-eyebrowed, Quebecois detective, and Depp’s and Smith’s daughters (Lily-Rose Depp, Harley Quinn Smith) in the starring roles. Even so, the film isn’t likely to go beyond a highly self-selecting audience, one that’s likely to be watching on their handheld or home-viewing devices.

Set in Winnipeg, and centered around the Eh-2-Zed convenience store (a nod to Clerks’ Quick Stop), Yoga Hosers follows clerks Colleen M (Smith) and Colleen C (Lily-Rose Depp), two 15-and-a-half-year-old girls with a penchant for yoga and rocking out in the back room of the store.

Not particularly customer friendly, they spend most of their time telling consumers “sorey boot that” (translation: “sorry about that”), ogling senior stud Hunter Calloway (Austin Butler) and texting on their phones.

But the lives of these ordinary high-schoolers are about to take a turn for the absurd after their history teacher (Vanessa Paradis) educates them about the city’s sinister Nazi past. It seems a German Fascist party leader, based in Winnipeg, disappeared without a trace many years before and was never seen again.

Later than night, the girls find themselves face to face with a pair of incompetent killer Satanists and an army of the aforementioned “Brazis” who murder people by going up their buttholes. With the assistance of their yoga-fighting skills and Guy LaPointe (Johnny Depp, reprising a role from Smith’s previous film Tusk), the two girls must dispatch of the Satanists, as well as the Bratzis and their nefarious Nazi leader (who likes to do impressions of Al Pacino and Arnold Schwarzenegger.)

This gag-filled romp is unabashedly and proudly ludicrous, with running jokes that play on the Canadian accent (lots of “boot” and “oot” for “about” and “out”) and Smith’s juvenile sense of humor. Samples: “Haters have to hate like douches need to douche” or “I don’t care about your beavers.”

Sure, some of it is funny, or at the very least, amusing. Seeing Depp in his hairy LaPointe get-up and speaking in a warbling, heavy French-Canadian accent, with moles that shift around his face, is certainly good for a few laughs. And Smith’s daughter, Harley Quinn, is a delightful comedic presence (more so than Depp’s offspring, who is not much more than a pretty face.)

The young Smith has a widely expressive face, flashing big, toothy smiles or slapsticky looks of horror that fit well within her father’s wacky proceedings. Justin Long, who shows up as the duo’s longhaired swami, Yogi Bayer (get it, “Yogi Bear”), is mildly comical, at best.

But Yoga Hosers is a movie that feels like it was more fun to make than to watch. With its garish colour palette, scatological and penis humor, and cameos from actors familiar to the Smith universe (Jason Mewes, Ralph Garman, Stan Lee), Yoga Hosers is more like Smith’s first John Waters movie—made for a more underground audience than a mainstream one. The director himself likens it to Clueless meets Gremlins, which may reflect his sources of inspiration, but it doesn’t come close to those films in its level of humour or entertainment.