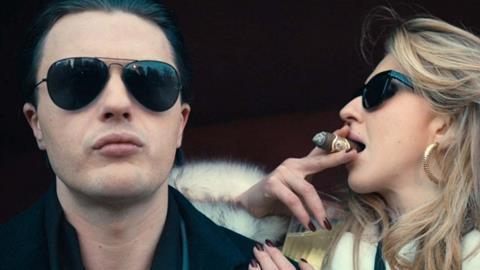 A naïve but rather ambitious Bonnie and Clyde couple takes on the New York mob in Raymond De Felitta’s impressively sustained and well performed drama. It might well be familiar fare – though its 1991 backdrop of Queens is beautifully recreated – but the sheer verve of the performances make it stand out, with some delightful comedy asides giving it an extra edge.

The climactic sequences are beautifully staged by director Raymond De Felitta, who draws great performances from his cast.

A heavily bearded Andy Garcia – all gravitas and mob boss wisdom – is reunited with director Raymond De Felitta (the pair made the underrated City Island together) to great effect, though the core of the film is the antics of Tommy (Michael Pitt) and Rosie (Nina Arianda) as they start robbing Mob ‘social clubs’ just as the city gets caught up in the John Gotti trial. The film, which opens in the US this week, was well received at its world premiere at the Miami International Film Festival.

Though Garcia and Pitt (to a lesser extent) may well be the marquee names, it is the gloriously vivacious, off-beat and freewheeling performance from Nina Arianda (from Tower Heist and Midnight In Paris, and recently announced to play Janis Joplin in Sean Durkin’s biopic Janis) as the lithe and wide-eyed Rosie, desperately in love with her man and caught up in his plans to steal from the Mob.

The film opens with the crazy-in-love couple trying their hand at robbing a flower shop on Valentine’s Day (cash and roses are on Tommy’s mind), but are soon caught and sent to serve time for a short stint. Rosie is trying to go straight and works for a collection agency staffed by ex-cons and run by an always smiling and positive Dave Lovell (Griffin Dunne), and when Tommy is released she get him a job there as well.

But Tommy’s heart is not in it. He still carries baggage from his past, and bears a grudge against the Mob who extorted and beat his father – who also ran a flower shop – and starts to get obsessed with the Gotti trial. After they realise their wages amount to virtually nothing, Tommy comes up with the idea of raiding Mob clubs (he learns from the trial that firearms are banned in such clubs) and the pair rather clumsily set about robbing from the mob.

The FBI, who are watching the clubs, are bemused and amused (especially when Tommy makes a band of mobsters take off their clothes and they are photographed by the FBI in their underwear), while local columnist (Ray Romano) starts to chart their exploits. But it isn’t wise to upset the mob, and eventually boss Big Al (Garcia) - who favours cooking for his grandson and fishing rather than violence - eventually calls for action.

Jonathan Fernandez’s script offers up some delightfully dark laughs (particularly when Rosie has to show Tommy how to use the Uzi he has bought for the heists), and while the film’s title may imply fluffier laughs (‘Rob The Mob’ does sound playful rather than serious) it is a drama with moments to smile at rather than an out-and-out comedy affair. The climactic sequences are beautifully staged by director Raymond De Felitta, who draws great performances from his cast – the likes of Griffin Dunne, Ray Romano and Michael Rispoli are all excellent - but the film really rests on the considerable charms of his young Bonnie and Clyde couple balanced by the sheer innate gravitas and intelligence of Andy Garcia.