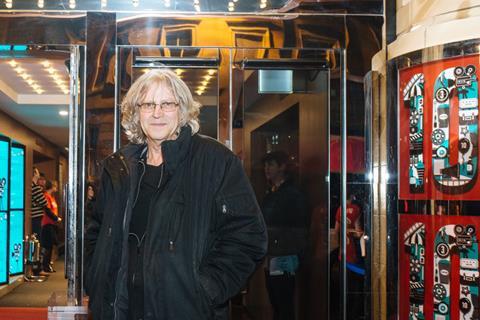 Believed lost for over 20 years, Roger Christian’s Black Angel screened last night at Glasgow Film Festival with the director on hand for a candid and entertaining Q&A.

Having won the Oscar for Best Art Direction for Star Wars, Christian’s directorial debut would have a Star Wars connection too. Black Angel screened with The Empire Strikes Back in the UK, Scandinavia and Australia before all prints of the film were lost.

“I was in Romania right after the revolution filming Nostradamus and the company that held all my masters went bankrupt and threw everything out. I never forgave them,” Christian said. “The neg turned up about a year and a half ago by sheer destiny. Rank Laboratories, who had the negative, kept them in WW2 bunkers outside London because they said it was perfectly dry and secure.”

The negative was moved to Universal before Athena Studios restored the print frame-by-frame, ahead of its first showing at last year’s Mill Valley Film Festival. It was here that Guy Veale – who chaired the Q&A – saw it and started the ball rolling on the film returning to Scotland where it was filmed.

So how does Christian feel about his film being rediscovered? “It’s been very interesting. I had no money and a crew of eight people, and I thought maybe I should leave it as a myth because I didn’t think it would ever hold up. Films aren’t paced like this anymore.”

With influences including Kurosawa and Tarkovsky, the origins of Black Angel stem from the first film Christian worked with George Lucas on, Lucky Lady.

“We were working in the worst heat I’d ever been in and a lot of us got sick. I was put into hospital – eight stone and on the point of death – and in this tiny hospital, there was a poster of Scotland on the wall in the room. That single picture gave me the will to live and when I wrote the story, I always wanted to do the fight with death,” he remembered.

Coming to Scotland “fulfilled everything I ever wished for” according to Christian and working on Star Wars proved useful in two ways for the filming of Black Angel.

Firstly, how to work with limitations: “I was set director on Star Wars and I spent four months with George and the designer before the film was greenlit. We had no money - $4m to make that huge film – and we had to work out how to do it. I was an alternative thinker so I found ways to make the sets out of aeroplane scrap and things like that.”

Then, Christian was at the sound mix of Alien when the head of Fox came in, explaining that there was a government fund of £25,000 to make a short film to accompany Empire and wanting to fax the story of Black Angel to George Lucas. Christian found out the next day that Lucas wanted the short to be made and without outside interference from anyone.

And with Black Angel now out in the public eye again, Christian sees a potentially vibrant scene for short films. “We decry that we spend all this money on films and people watch them on cell phones,” explained Christian. “I think this could give a rebirth to the whole idea of these. With laptops, iPads and everything, and the attention span that’s changing with audiences, this is a great arena for short films.”

Talk turned to Star Wars and Christian described his best inventions for the first film in the iconic trilogy. One was the lightsaber – “I made it for £8 and the producer Gary Kurtz kept the two I’d handmade and sold them for $260,000” – and the other was R2D2 – “the film would never exist without the two robots.”

The final word, perhaps inevitably, was left to the new Star Wars outing and Christian is clear what they need to make it work. “As long as they keep the mythology because that’s what George’s genius is: making a ride on the surface but underneath there is this true mythological journey going on.”