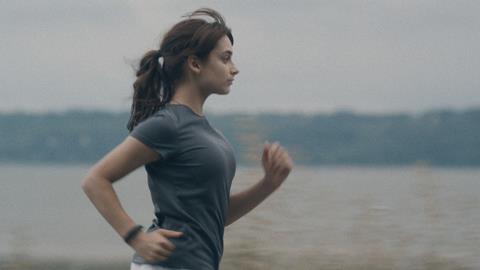 An engagingly well-made Canadian drama – with touches of comedy – about a young woman and her sexual awaking, Sarah Prefers to Run (Sarah prefere la course) might be rather familiar in terms of storyline and structure, but it is given energy and drive by an impressive lead performance by Sophie Desmarais as 20 year-old Sarah, who – as the title suggests – just wants to run.

The real revelation here, though, is the impressively rounded performance from young Sophie Desmarais, who impressively manages to play the humour as well as the drama.

Quebecois writer-director Chloe Robichaud’s film is attractively made, and while Sarah’s stumbles in life and on the track never really rack up the drama levels, this quality film should well interest further festivals. The film screened in Un Certain Regards at Cannes.

After showing other runners a clean pair of heels on the Quebec City track team, dedicated Sarah heads off with local lad Antoine (Jean-Sebastien Courchesne) to Montreal to train with the McGill Athletics Team, where in amidst the track work more than a few romantic issues arise.

She and Antoine get married for financial aid reasons, and while she sees the relationship as essentially a business one he starts to falls for his wife-cum-roommate. But at the same time Sarah starts to take a shine to fellow teammate Zoey (Genevieve Boivin-Roussy).

As if thinks aren’t complex enough, that old stand-by the ‘medical condition’ comes along to give an additional dramatic push to the story. And while it certainly adds a dash of headier complexity to proceedings it does tend to also overshadow the nicely developing relationship conundrum developing between Sarah, Antoine and Zoey.

The real revelation here, though, is the impressively rounded performance from young Sophie Desmarais, who impressively manages to play the humour as well as the drama; looks at ease on the running track, and strikes up a fine rapport with her co-stars. She is an actress to keep and eye on, and certainly helps take the film to the finishing line.