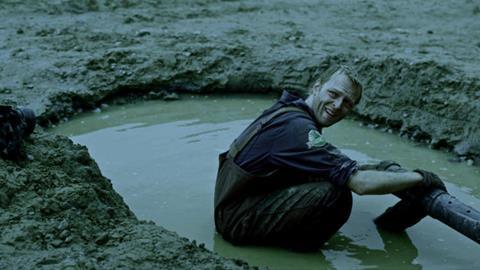 Septic Man is one of those genre films that is pretty much summed up in the title. Yes, Septic Man – which premiered at Fantastic Fest in 2013, but gets a brief US theatrical release this month – is about a man who works in the sewage industry who gets metamorphosed into something rather unpleasant.

There are some horror (and yes even chainsaw) moments, but the film lurches along with a rather plodding seriousness – maybe there is an ecological message in there somewhere – but makes the mistake of being just too serious when some humour would have helped.

Oddly, for such a wacky notion, Jesse Thomas Cook’s film lacks the laughs that you might think come along with the horror, and while it does get wackier – and more than a little ironic – as time draws on a little more self-aware humour wouldn’t have gone amiss. But at least it sticks to its guns and ticks all of the right genre boxes.

That being said, while Septic Man might sound on paper like a little gem that Troma might have made, it is rather slow moving fare with much rambling around in dark sewers calling out for aid rather than traditional horror fare. And while the make-up is terrific it is the pacing that is the problem, though at the same time the script offers little in the way of plentiful drama to keep things really interesting.

Sewage worker Jack (Jason David Brown) is approached by Prosser (Julian Richings) for some off-the-books work to try and solve the town’s water contamination crisis, for which he will be paid $200,000, which, with a baby on the way, is just what Jack needs. But he takes a fall and gets trapped and exposed to noxious material that sees him start to mutate.

His attempts to escape are hampered by a pair of oddball brothers - Giant (ex-wrestler Robert Maillet, who played Kaidanovsky in Pacific Rim) and the razor-toothed Lord Auch (Tim Burd) – while he also comes across floating bodies and all sorts of other nastiness.

There are some horror (and yes even chainsaw) moments, but the film lurches along with a rather plodding seriousness – maybe there is an ecological message in there somewhere – but makes the mistake of being just too serious when some humour would have helped. Lets face it, you need some laughs when faced with a carbuncle-faced sewage monster.

The ever-reliable Stephen McHattie chips in with a nice turn as the town’s mayor and Molly Dunsworth is impressive as Jack’s wife, but in the end while the concept it fine, Septic Man just isn’t oddball enough.